In a world without Google, Co-Pilot Live would be A-OK. It’s has a familiar GPS nav interface, works well enough, and, at $29.99, is priced fairly.

But how have times changed.

I use Google Maps Navigation (free with Android) all the time. We are constantly on the go here in the Bay Area, covering events for Stark Insider. One day we’re up in Napa for a wine tasting, the next over to San Francisco for opening night at A.C.T., then down to San Jose for a Silicon Valley panel. Navigation is part of my life. And it forever changed for the better in November 2009 when I picked up the newly minted Motorola Droid smartphone from Verizon. Google Navigation has been, quite simply, aces. It’s never let me down. I’ve never had to type anything on it. The voice recognition is that good.

So when I had a chance to review CoPilot Live, a decidedly traditional approach to nav, I was somewhat apprehensive (and likely biased). Still, I wanted to see if it was possible for Google to get one-upped. Could it be beat at its own game?

On the up side, there’s not much to learn with CoPilot. You set your address and off you go. If you’ve used a modern day GPS like those available from Garmin or Magellan, than you’ll be instantly familiar with the interface. One area it bests Google is its flexibility in assigning readouts to the left and right “info areas” next to the upcoming turn information. There are 6 choices for each including distance, ETA and time remaining.

I found the 3D maps to be readable enough, even on the Droid’s small 3.7-inch display. POIs, route information and detour options are all just a click away. The fonts, in white and bright yellows, are large and clean and easy to read even with the Northern California sun on highway 101 beating down on the dashboard. Lane guidance (ClearTurn) is helpful too, something absent on Google.

Installation, however, is a bit of a bear.

First, this is a humongous install. The app itself is about 100MB, which is large by app standards. Worse still, before you can use the nav you need to download a map. I chose North America and was shocked that it required 2GB of space! Here’s a fundamental difference between CoPilot Live and Google Nav: one uses a local download for maps, the other the cloud. Each have their advantages. Google Maps are continuously updated. I found several locations on it — such as our local Club One gym — that weren’t in the CoPilot database. However, in CoPilot’s favor is the ability to work offline. Even if you don’t have a network connection, you can plan a trip, and lookup POIs. For some, this could be a killer feature. Others, such as myself, will find it less helpful. It depends on how you plan to use your GPS.

Voice guidance is primitive — robotic, stunted — on CoPilot compared to Google. Also, it doesn’t provide the full text-to-speech (TTS) direction: “Turn Left” instead of “Turn Left on Mission Street.” (Ed- a spokesperson for ALK Technologies has informed us that the TTS feature in newer versions of CoPilot do include the street name.)

CoPilot professes to be social with a “Personal Connect” feature that allows you to share trip information via Twitter and Facebook —- something I did not test. However, given Facebook’s decision to pull “Places” ALK Technologies will need to find a substitute for check-ins — why not Foursquare I wonder?

PhotoNav is a nifty feature (though I doubt I’d ever use it) that pulls up the photos on your smartphone. Click on one, and the CoPilot will take you there. Follow that bowl of sushi!

At the end of the day, I didn’t find any compelling reason to use CoPilot over the native Google Navigation feature built into Android. Google is more responsive, fully updated, and offers better voice prompts. For those that need offline capability — travelling where no data connection is available for instance — this app is worth considering. Just keep in mind, the interface is more 1990s Mariah Carey than 2010s Lady Gaga.

Extras available for purchase include ActiveTraffic ($9.98 per year), and Fuel Prices ($4.98 per year).

If all you need is basic turn-by-turn directions without the advanced options you can get CoPilot Live Standard USA from the Android Market for only $4.99 – a potential bargain if you can live without the the extras. 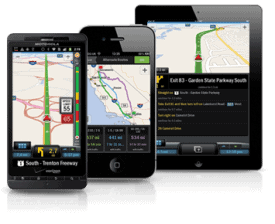 In a Tweet: If you prefer the Magellan and Garmin paradigm, you’ll appreciate CoPilot Live. Fans of Google Maps Navigation, as you were…