It was love at first sight. It happened about ten years ago, at the Whitney Museum of American Art in NYC, when I first saw the Quilts of Gee’s Bend. These incredible works of art were created by four generations of African American women, all descendants of slaves, from the tiny community of Gee’s Bend, Alabama. It was a toss-up whether I was more enthralled by the raw, bold quilts with more colors in them than Joseph’s coat or the barely colored pieces fashioned from torn up work clothes and patched denim, so faded that the original indigo color had been reduced to a pearly gray.

Since I had never heard of this remote area I did a little research and found out that Gee’s Bend is a secluded sliver of land, located on the bend of the Alabama River, southwest of Selma, Ala. Founded in antebellum times as a cotton plantation, it was first owned by the Gee family and then by Mark Pettway and his descendants. After the Civil War, the freed slaves took the name Pettway. For many generations this severely impoverished all-black community was mostly isolated from the rest of the world. The women made quilts to pass the time and to keep their families warm, passing down the skill from to mother to daughter. These resilient women probably never suspected that one day they would reach celebrity status and be flown around to major museums (including the Smithsonian)  to speak about their labors of love, which The New York Times called “some of the most miraculous works of modern art America has produced”.

Following a recent press trip to Northern Alabama, I decided to high tale it down to the southern part of the state and  see if  I could arrange a Gee’s Bend, “howdy-do-why-don’t-you-sit-a-spell” visit. I had been introduced to Linda Vice, a wildly enthusiastic, blond bundle of energy, who was the extremely capable director of Southwest Alabama Regional Office of Tourism and Film aka The Front Porch Philosopher. She made all my plans and doubled as my extremely knowledgeable (full of facts peppered with lots of fun gossip) tour guide. She even surprised me with another unbelievable stop (more later) to another place on the bucket list. A one trip two-fer! 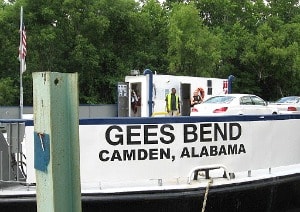 We drove onto the Gee’s Bend ferry, which now makes many daily runs between Camden and Gee’s bend. The only other customers were a local man and his 8 yr old daughter, a cute, chubby, freckled face girl who was staring intently into the water- hoping to spot a gator.

As the ferry pulled out, Linda asked me if I had heard the story about “The Light in the Water at the Gees Bend Ferry.” Since I hadn’t, she proceeded to enlighten me (in her soft southern accent) about these mysterious lights. Out of the corner of my eye, I saw the  girl slowly sidling closer and closer until she was almost nestled under my arm, her eyes open as wide as a gators mouth.

“Do you like a good ghost story?” I enquired.

Yes, ma’am, I sure do,” she replied earnestly.

Next thing I knew, her daddy was right along side her, listening just as intently. (I later found out that almost everyone here is down for a good ghost story –as long as they could relay their own experiences after. (Check out Alabama’s Black Belt Ghost Stories for more haunted tales.) 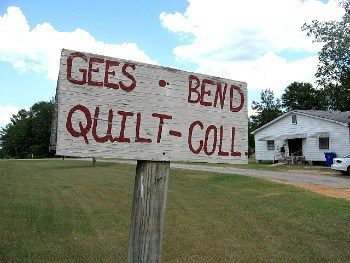 After we docked, we headed to the Boykin Nutrition Center, where the quilters gather most mornings to sew. Along the way we passed some large square painted quilt blocks, which are part of the Quilt Trail. Local artist, Tyree McCloud, painted 10 wooden quilts-replicas of designs selected for a series of commemorative stamps issued by the U.S. Postal Service in 2006, and placed each mural by the original home of the quilter.

When we reached the center I grabbed my camera and gift bag and excitedly ran inside.(Before leaving home I had asked Linda to recommend a small gift I could bring to the ladies. She told me that they would probably appreciate some really good quilting needles. I had no idea what constituted a really good needle but after two hours of research ended up buying the Cadillac of needles made in England. I also sprung for some gold thimbles that looked pretty and just to be on the safe side, threw in a few bags of my hometown Ghirardelli chocolates, which everyone loves.)

I was fortunate to be able to meet two Pettway quilters during my visit, although Mary Anne Pettway (the manager of the Gee’s Bend Quilters Collective which began in 2003) was quick to point out that 75-year old Nancy Ross Pettway had only married a Pettway but she was BORN a Pettway!

For the next two hours I sat spellbound as Nancy and Mary Ann shared their moving stories-told with great humor, dignity,  humility and heart-felt appreciation of the bounties that have been bestowed upon them-all stemming from quilting. They even threw in a soul-stirring rendition of one their favorite gospel songs they sing while working. (They did a recording back in 2007 but so far nothing has come of it-although when they walked in a museum last year, they heard some gospel music playing and much to their surprise it was their recording.)

“We like to tell our story and sing songs to thank Jesus for all that he’s done for us.” Mary Ann explained. “When we was coming-up (being raised) we had no electricity or running water. We made quilts just to keep warm because our houses weren’t insulated. I was one of 12 children and we didn’t have no beds. Our mama would make a big mattress out of old fertilizer sacks filled with corn husks and a bunch of us would lie on this covered by a big pile of quilts.”

Mary Ann proudly showed me what she calls, “The World’s Only U.S. Postal Office Uniform Quilt.” After retiring from her job at the post office, her friend had sent her 19 years worth of her work shirts, which Mary Ann spent the next two years stitching into a queen size quilt- emblems and all, asking price- $25,000, although she’s hoping that a museum will want to hang it. It’s an incredible quilt but it’s not the longest she’s spent working on one piece. That one would be her “Running of the Mouth “ quilt. It seems that when she was a little girl and talking nonsense, her mother would tell her she was running off at the mouth again and made her sit down and stitch a block. The habit stuck and she’s still adding on to that quilt today.

Nancy, who figures she’s made close to 300 quilts so far, says, “When I can’t sleep at night I lay in bed and come up with designs.” When she was  young, she remembers watching her mother sitting in front of the fire and cutting out fabric squares, throwing the scraps in the trash pile. Nancy pulled these out and told her mother, “I want to quilt.” Her mother taught her how to sew the pieces together in a block. This went on for a few years, until one day her mother took all her blocks and quilted them together for her and said, “when you get married this will be your wedding quilt.” And it was.

Nancy has been on quite a few trips with the other quilters, which she thoroughly enjoys. Her favorite city so far is Washington DC and her favorite airline is Southwest. “I just loves the way they take off and land,” she said with a big smile and whooshing arm movements. “The other airlines drive down the runway way too long but Southwest just takes off straight up.”

When I asked for some tips on how to get started, they said it was simple. “Gather up some old clothes that you don’t want no more then cut them in pieces. Start with a nine patch block: five of one color and four of another. Sew them together, and then sew a piece of binding around the edge if you want. Stitch the backing, the filler and the top together and you have yourself a quilt.

Another topic that the ladies are almost as passionate about is cooking, which they also learned from their mothers. Nancy reminisced about her mother’s scrumptious breakfasts which included ham, eggs, grits, and biscuits topped with red-eye gravy, but she said sadly, “I never got her recipe for fried corn-which to this day was the best I ever ate.”

I wished I had more time to hang with the Pettway gals. Next time I want to spend a couple days here so I can pick up some quilting skills and maybe score an impromptu cooking class. Think I’ll pass on the singing.

All too soon it was time to leave.  I handed the ladies my present. When they saw the small British needles, they let out a loud hoot. “What are these baby things?” they asked, laughing hysterically. And then they saw the gold thimbles and really cracked-up.

“These sure are pretty but they ain’t never gonna fit on our big fingers.”

“I’m so sorry. But here.” I said hopefully, handing them the chocolates. “I’m sure you’ll like these. They’re really famous in San Francisco.”

Big laugh by all. Fade to group hug.

I wish I had more time to hang with the Pettway gals. I think I’ll keep them on my bucket list for a return visit, when I can join a quilting bee, and maybe they’ll teach me how to cook some of their southern specialties. Though I think I’ll do them a favor and pass on the singing.