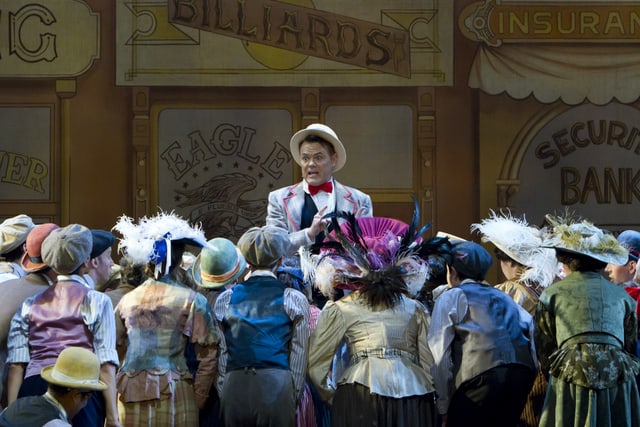 The often dismissive use of the words “community theatre”  is unfortunate because community theatres are the rare ones who muster the means to produce large-cast spectacles that are such a part of our collective theatre history.  Such huge extravaganzas seem as unobtainable these days as sending a man to the moon. We’ve become too poor in too many ways that have nothing to do with the almighty dollar. Fortunately, this is where community theatre saves us, as groups like Broadway by the Bay take on huge productions like The Music Man. These shows may not have the high tech flash and glitz of Dream Girls or other big name touring shows, but all too often flash and glitz merely mask more fundamental deficits in the production.

The selection of The Music Man seems deliciously ironic. Just as we watch politicians in Iowa fall over themselves on issues of moral certitude, The Music Man makes us realize that what passes for Iowan family values has been a joke at least since 1957 when the play first opened on Broadway. Watching Meredith Willson’s self-conscious River City meddlers provides some perspective on the current political shenanigans.

A well-oiled, cohesive ensemble distinguishes an excellent production of The Music Man from one that is merely good. The play opens with a passel of traveling salesmen and relies on their sales patter and physicality to convey the movement of a train. While a few poorly synchronized movements were briefly distracting, this disconnect seemed to be no more than an opening night gaffe because the ensemble moved so tightly thereafter, they were often more interesting than the leads.  The ensemble worked together flawlessly in “Trouble in River City,” “76 Trombones,” “Marian the Librarian” and other big numbers. Excellent execution of well-choreographed scenes raised the energy to levels that far exceeding the rock music in the square outside that audience members walked through to get to the theatre earlier in the evening.

Tom Reardon as Professor Harry Hill and Kerie Darner-Moss as Marian Paroo were well cast. Darner-Moss’s mellifluous voice added depth and richness to otherwise forgettable numbers such as “My White Knight,” and her lovely burnished tones positively shone in more recognized numbers such as “Til there was You.” Reardon was an athletic Harry Hill, with spot-on moves, easily dominating the stage. This is a  difficult role because in many numbers Hill is the single counterbalance against the large ensemble.  Reardon’s voice occasionally took on a gravelly tone when singing above the ensemble, making the audience strain to make sense of the lyrics at moments. This was completely  unnoticeable in smaller numbers such “Lida Rose.”

The evening closed when the San Mateo High School Marching Bearcat Band emerged from the rear of the theatre for the finale. This was a perfect note, rooting a play  about community firmly in the community. Community theatre is best at giving ourselves right back to us.  In this respect, Broadway by the Bay’s The Music Man is a clear win.

Broadway by the Bay