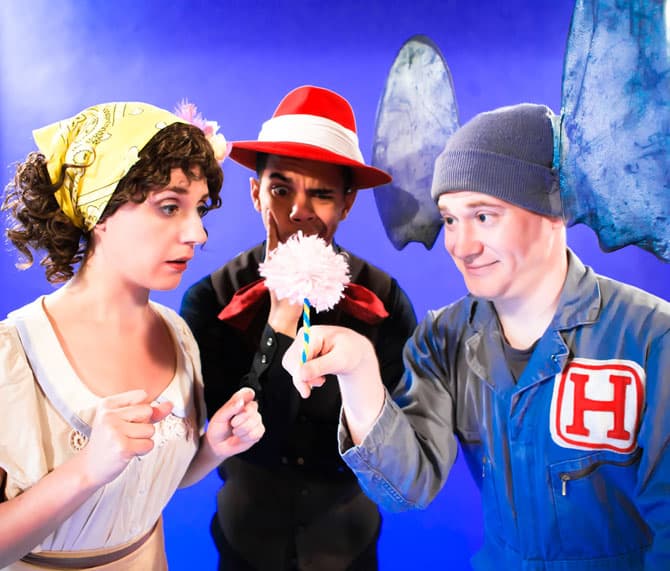 There’s been a Seussical-saturation the past five years. In the south bay, it’s graced stages at PTY, Palo Alto Children’s Theatre, San Jose Children’s Musical Theatre and Sunnyvale Community Players in the past few years. One might think the show is in danger of exhausting its appeal, but the Berkeley Playhouse succeeds in staging a novel production that draws upon both their professional company and conservatory.

Seussical’s success lies in part in it’s surprisingly complexity. Fusing elements from a half-dozen Seuss books, there’s at least four plot lines, including Mazie’s abandonment of her egg, Horton’s fixation on the dust speck, the unrequited love of Gertrude McFuzz and JoJo’s exile to military school. Through it all wends the trickster Cat in the Hat and the cute-but-indistinguishable Whos.  This makes for a fast-paced show keeps both parents and kids engaged.

William Hodgson was a superb Cat-in-the-Hat, both the omniscient observer and instigator of the action. Hodgson’s lean angular body lends itself perfectly to striking geometries as he watches the action from the sidelines.  His lithe nimble moves leave no doubt that he’s the true authority on stage. Substituting the trademark hat for more sophisticated headwear, he’s a very adult Cat who marks new turf in this role.

Benjamin Pither, as Horton, and Chloe Killebrew-Bruehl, as JoJo, were imbued with an overwhelming, but credible sincerity, as they work together as a pair of doubles, opposites with respect to size, but outsiders both. The ever-plaintive Gertude McFuzz was brought to life by the extremely capable Rebecca Pingree.

Lead roles aside, what really made this production was how well the ensemble worked together.  Initially awkward, the company visibly came together early on in “It’s Possible” and remained so throughout the two acts. Children were seamlessly integrated into the production as Who’s, Sneeches, Loraxes and Star-Bellied Sneeches.

The Berkeley Playhouse succeeded in keeping this production ever-new, without deviating from the script, by adding the talents of aerialist Kimberly Miller to the circus scenes. Miller’s sinuous inversions and deft aerial skin-the-cats mesmerized the audience and worked well with the other visual elements of the set.  It’s hard to imagine Julia Morgan thinking her signature wood beams of this lovely venue, (originally St. John’s Presbyterian Church and Sunday School) would be used to secure aerialist sashes.

Strong vocal numbers by Nicole C. Julien, as Sour Kangaroo, and Sarah Mitchell as Mazie added much to the production. Julien packed the Sour Kangaroo role with energy and style, bringing it from a lesser role to a more dominant one.

Seussical the Musical will continue to make audiences pine for the the far-away Solla Selew through August 14th.