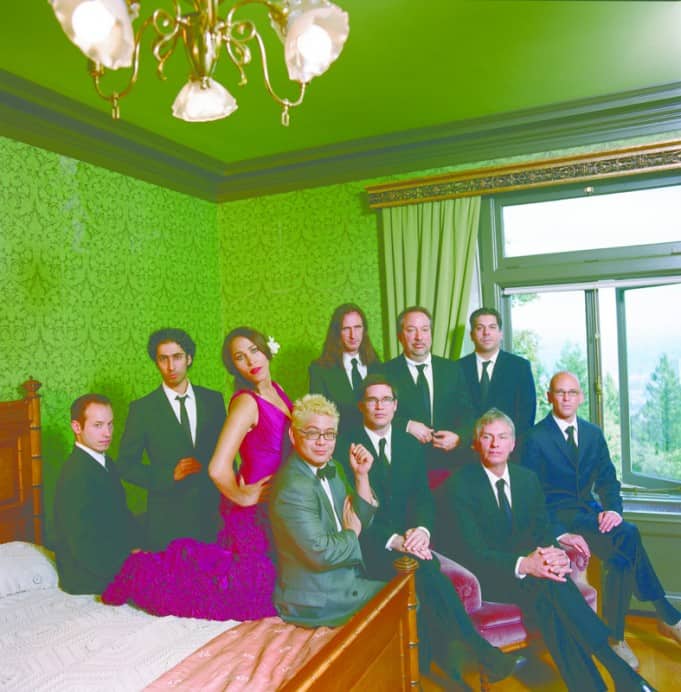 China Forbes and Thomas Lauderdale go together like gin and tonic, so the news that Ms. Forbes wasn’t present because of emergency throat surgery elicited a reflexive groan through the audience. The first emotion was concern for Ms. Forbes. After having spent hundreds of hours with her voice on CDs, you feel like you know the girl. The second impulse was that the night was ruined.

As least as to the second point, I was dead wrong. If one measure of a truly excellent band is how fast they can find a singer who can learn a boatload of material in five languages and be genuinely entertaining in the bargain, then Pink Martini qualifies.  Moreover, it says a lot about the flexibility of Pink Martini fans who truly rooted for the last-minute substitute Lucy Woodward, willing her through those first few songs. Their patience paid off because she just got better and better throughout the evening. Her breathy voice disappeared, taking on a warmth and glow of its own. She wasn’t China Forbes, but she was damn good – and that’s all that mattered.

The magic of Pink Martini is they open a door to a world tantalizingly free from the silly intensity of our daily lives. One wants to gift annoying coworkers with Pink Martini tix, so they’d just get over it, you know? Maybe infect the whole Congress with them.  I’d even wager that Pink Martini could have Bill Ayers and John Boehner doing a cheek-to-jowl conga out the door. Last night, the debt crisis, the Tea Party and even Sarah Palin just stopped existing. I don’t know of any other band who pulls this off so insistently and effortlessly, making accessible entertainment smart.

The band opened with one of their signature Afro-Cuban songs that was so energizing that I suspect that many didn’t wonder at the absence China Forbes until the announcement was made. Lucy Woodward joined the band immediately thereafter. Refreshingly, the show wasn’t a rerun of their June 2010 material. The band retained just enough of their old material to provide a point of familiarity – and replaced old faves like Dosvedanya Mio Bombini with new material. Robert Taylor did astonishing things on trombone as did Gavin Bondy on trumpet.

The voice of NPR White House correspondent Ari Shapiro was even better than it was last year, taking on a richness and resonance that just weren’t there before. “But Now I’m Back,” which brought down the house in 2010, was followed by La Soledad.  After intermission, he rejoined the band to perform Sympathique as a duet with Lucy Woodward wring every bit of the insouciant playfulness out of this tune.

Having the San Francisco Symphony conducted by Donato Cabrera as a backup band just sweetens the pot, not the least because we get to hear more of Mark Inouye and the rest of the fabulous brass section. The audience floated out of Davies Hall last night on a cloud of Afro-Cuban, Turkish, Croatian, French  good will – which is as good as it gets for a Thursday night.

The Story of Pink Martini with Thomas Lauderdale