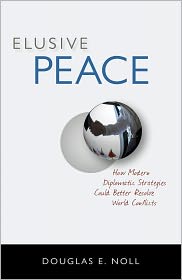 Many communities offer some kind of mediation services that are eminently useful when dealing with landlords, neighbors and about-to-be former spouses and the like. By turning down the heat, a skilled mediator saves time and money while helping the parties arrive at a solution together. The mediator’s magic is he doesn’t impose a solution. Author Douglas Noll is a self-described “lawyer turned mediator.”  In writing “Elusive Peace: How Modern Diplomatic Strategies Could Better Resolve World Conflicts” he turns his mediation skills toward the pursuit of world peace, arguing the contemporary diplomats are working with an 18th century tool set that it ill-adapted to contemporary problems.

The chapter entitled “Family, Friends and Non-Friends” shows Noll as anthropologist. He speaks directly as to why the cross-fertilization of Pastun social identity with that of Arabic Islamic fighter was so powerful. This is all the more appreciated because this take on the material was ignored by popular writers Ahmed Rashid and Lawrence Wright.  Noll also speaks as a refreshingly un-academic historian, willing to connect the dots between the Jewish revolt against the Romans in 130 CE to Ehud Barak’s 1999 remarks about settlements on the West Bank.  His sense of historical cause and effect serves him well.

It’s when Noll tries to speak as a foreign policy analyst that he oversteps and loses credibility. For example, statements such as “I am about to commit heresy:  Sovereignty is not what it is cracked up to be” are hardly heretical.  The journal Foreign Policy deals with the breakdown of the sovereign state so frequently that their Writers Guidelines state “Don’t send us any article or proposal that begins with ‘Since the end of the Cold War…’ or ‘In the wake of September 11…;’ Really. Please don’t.”

While many of his stories about mediation between individuals are fascinating (and some of his stories, such as the one that described mediation efforts between individual Israeli and Palestinian women, are insightful in extremis) he is unconvincing when he speaks about mediated agreements between peoples.  The deaths of Anwar Sadat and  Yitzhak Rabin leave a gaping scar across the Mideast, illustrating the price paid by successful peacemakers. The techniques Noll proposes offer no security to the very real risks paid by the successful peacemaker, and nor do they point to how mediating agreements between leaders give rise to agreements between peoples.

This criticism aside, Noll’s intellectual honesty is refreshing, as he also speaks to the limitations of mediation. For example, he writes “While mediation properly conducted can product amazing results, its effectiveness is limited by the motivations of the parties. Sometimes, the most that can be expected is a mediated conversation between the parties, not a negotiated agreement.  Sometimes violence must be met with violence.”

Criticisms aside, Noll’s contribution is one of the few flickers of hope on an otherwise grim horizon. For that in itself, it is valuable.