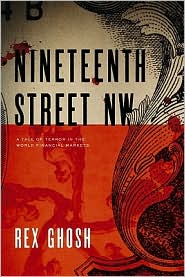 “Economics is where medicine was in the Middle Ages, only our prescriptions are even more painful. Country’s in crisis? Well then, tighten policies, raise interest rates, slash budgets, and while we’re at it, bring out the leeches and bleed the patient as well.”

This isn’t a pronouncement about the current debt crisis, but a running commentary from one of the characters that people Rex Ghosh’s first novel Nineteenth Street NW.  Fast-paced with compelling characters, it draws you in and take you for an engrossing ride, that’s all the more relevant, given the current crises in Europe and the U.S..

We meet Sophia Gemaye on a flight out of Dulles to London, agonizing about the explosives contained in her laptop and chatting up a small girl about her favorite ballet. Unlike the terrorist in John Updike’s novel Terrorist, we like this girl. With her western education, sense of style and relentless curiosity about her handler Melamed, we almost forget her primary motivation lies in achieving some vision of justice for her third world home.

Immediately thereafter, we meet Celine O’Rourke, a low-level economist at the IMFO, an IMF-like institution. Both naïve and knowing, she’s as comfortable manipulating world markets as she is uncomfortable in personal relationships. Just as we see the terrorist handler through Gamaye’s eyes, we’re privy to the internal diplomatic machinations of the IMFO through O’Rourke’s.

The novel goes back and forth between both characters, giving them equal weight. In having relatively junior people advance the plot, Ghosh lets the reader learn about the workings of the terror cell and the IMFO in a novelistic real time. These two worlds remain separate until Gamaye starts a hedge fund with the goal of bringing down whole currencies.  At this point, the lives of the women become intertwined in explosive ways. With characters far more interesting than most thrillers, Nineteenth Street NW is a thinking person’s beach read.

You won’t come out of this novel speaking like Alan Greenspan, but you’re more likely to take a reasonable stab at dissecting the oracular pronouncements for which he was known.

Educated at Harvard and Oxford, IMF economist Rex Ghosh is doing for the econ novel what Abraham Verghese did for the medical novel. In creating the IMFO, one suspects he could easily be writing about the IMF.  His insider take on inflated egos and diplomatic jargon makes spending a few brain cells on purchasing power parity and fundamental equilibrium exchange rates (FEER) palatable, and even enjoying, for the non-econ reader. You won’t come out of this novel speaking like Alan Greenspan, but you’re more likely to take a reasonable stab at dissecting the oracular pronouncements for which he was known.

The only drawback to this work is that it feels like a first novel. While the overall arc of the novel is flawless, characters are slightly overdrawn. Occasional errors – such as Gemaye’s question “can you do pointes?” and a later gaffe when O’Rourke makes coffee with a French press with foam magically appearing suggest an unfamiliarity with both ballet and making coffee.  These are minor points, but work starts to lose verisimilitude as the reader braces for the next one.  These nits aside. Ghosh is on my watch list – and his upcoming work about the 600 million dollars that went missing during the Spanish Civil War will be high on my list when it comes out.