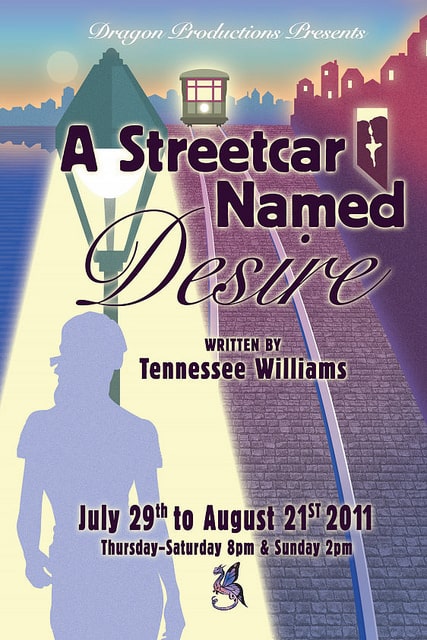 Producing A Streetcar Named Desire means stepping into some very big shoes. Dragon productions are uniformly excellent, in part, because they don’t over reach. I confess, I wondered if the Dragon would meet its St. George, because this seemed extraordinarily ambitious.

What perplexed me most was how Streetcar could possibly be pulled off on this tiny stage. Streetcar is just so huge – both in terms of the emotional and physical worlds. The Dragon created the physical world by relying on carefully demarcated areas on the stage  to suggest the various rooms and the walk up to the Kowalski apartment. This illusion largely worked because actors scrupulously maintained the separate integrity of those areas, but it still was a strain. However while the size of the stage presents problems for recreating the physical world, it amplifies the intense emotions, bouncing the intense Stanley Kowalski energy off every surface with a savage ferocity.

Set design, props and costumes were impeccably designed. The soft hues and clearly defined lines in Blanche’s clothing helped the audience clarify their take on this character when she herself verged incomprehensible. The 1950’s walkup seemed to take much from the basic outline of the Honeymooner’s kitchen, as it centered around a table and icebox. The only jarring note were the bottles of Bass Ale downed by during Stanley’s poker game.  High end imported beer doesn’t travel well to a working class 1940’s flat.

Performances by Meredith Hagedorn, as Blanche, and Andrew Harkins as Stanley Kowalski, overcame the limitations of the tiny stage. The drama moved so quickly and was so well paced, that the intermission seemed hardly necessary. Instead of the first act fidgets, I found myself dreading that the story would break.

New York Times Reviewer Ben Brantley once commented that Blanche vacillates between strength and fragility, and those who play her end up coming down too hard on one side of the other. Brantley’s observation is spot on because the dramatic tension is lost if the actress errs on either side, leaving the audience to wonder why they’re spending so much time with this character. Hagedorn gives us a Blanche who is confident enough to know she needs to confabulate  – and compelling enough that she has the audience’s sympathies for a psyche held together with spit and baling wire.

Kowalski’s character is equally fraught, as none of us ever got over Marlon Brando’s indelible mark on this role. Kowalski can’t be just the lout in the wifebeater who rapes Blanche – he has to do that without alienating the audience. In addition to mesmerizing us with his physicality and unpredictability, he also has to win us with his native intelligence. Andrew Harkins manages to do this in spades.  Credit should be given to the supporting cast who elevate Kowalski by intentionally remaining relatively undistinguishable in their inadequacy.