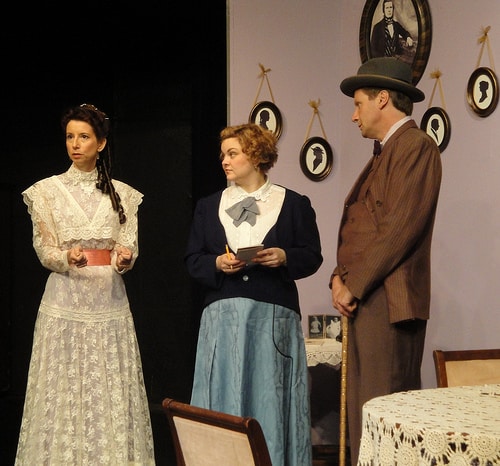 3.5 out of 5 stars - 'Sweet Stuff'
Off Broadway West Theatre Company 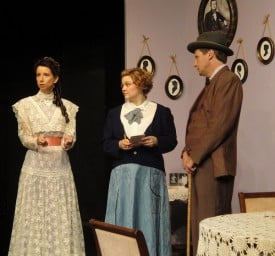 The Phoenix Theatre is a perfect place to see the new Off Broadway West Theatre Company’s production of Indulgences in the Louisville Harem.  Maybe it’s the six-floor elevator ride up, but one feels the separation from the world all the more acutely, a separation that’s necessary for theatre to work its magic. Walking into the semi-darkness of the period set, complete with daguerreotypes and black and white silhouettes, one settles in the velour seats with Debussy playing softly in the background, and the rest of the city simply fades away.

The period is unclear, but could easily be 1910. The world of the spinsters Violet (Kim Saunders) and Florence (Jocelyn Stringer) invites comparison to Tennessee Williams because it’s the only handle most of us have into the world of unmarried, fusty southern women of limited means. Firmly anchored to her place in the world, Florence is a stolid woman with sensible shoes. Of the two, she’s the one with the realistic fears of abandonment. Violet is invested with the infinite fragility of the long lace dress she wears. Emotionally labile, she alternates between quivering like a frightened rabbit and an excited child whose imaginative play of fancy is all the more powerful because Saunders keeps it reined in. Although they’re both childlike, playing house in a grownup’s world, there’s nothing two dimensional about either of them.

Playing off these two is a second set of doubles, Professor Amos Robbilet (Danien Cin Seperi) and Winfield Davis (Paul Stout). Acted way over the top, they’re as much a breath of fresh air for the audience as they are for Violet and Florence because until their arrival, one feels as mired as women in a very limited world.  This pair of charlatans is as much of a period conceit as the paregoric that Violet always seems to be looking for. Like Violet and Florence, they’re a pair of opposites with Robbilet (who looks like Pablo Escobar as played by Groucho Marx) being silent and Davis being irrepressibly loquacious. When they leave the stage, their absence leaves a yawning chasm.

Second only to these characters, Indulgences is driven forward by dialogue. The long monologues (or maybe the southern accent) require patience on the part of the audience. This pays off because there’re real gems in all this verbiage, but audience patience is tried when the charlatans leave the stage in the second act, forcing the action back to the women.

In many ways, this production works such magic that it embodies what the best of theatre is all about.  This is a world and people that will continue to live on in my mind… as I continue to ponder the surprise ending.