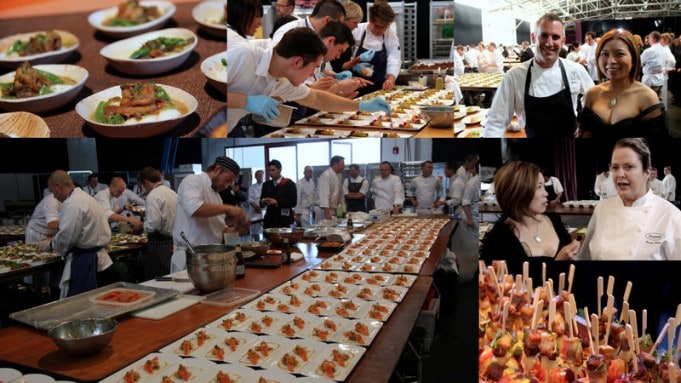 The annual benefit for Meals on Wheels of San Francisco was another smash. According to organizers, the 24th edition of the annual gala raised a record-breaking $1.4 million — the most ever in its history.

Because of the outpouring of generosity from those that bid on auction items, the hundreds of volunteers, and those that donated, approximately 350,000 meals can be provided to homebound seniors.

It was quite the scene at Fort Mason and Loni Kao Stark was there in her “Black Swan” (as Clint refers to it) in this on location video that takes you behind the scenes. Here’s your chance to see what a “kitchen” (i.e. mega warehouse!) looks like while a gourmet 5-course dinner is being prepared for over 900 guests. Clue: it’s a gorgeous symphony of organized chaos.

After sampling dishes from some of Northern California’s top chefs during a high-spirited reception, guests moved into the dining area where a live auction was held. Meantime, there was lively conversation and celebration in honor of a great cause, all while guests enjoyed some fine dining.

The climax of the evening (aside from a guilty-as-sin dessert reception!) was Fund‐A‐Route, in which guests pledged an astounding $360,000 towards funding a meal delivery route in San Francisco for the next year.

I could write more, but the best thing to do is to watch the highlights in this video package, shot on location at the hugely successful gala. Congratulations to all involved.

For more, don’t miss Loni’s write-up with even more photos: Star Chefs and Vintners Gala: Culinary creations paired with an inspiring cause.