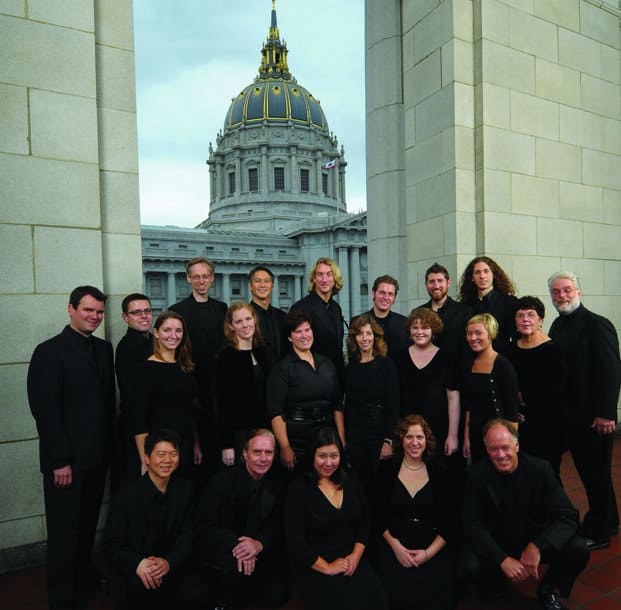 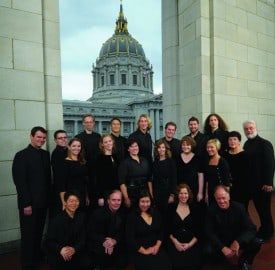 The Berkeley City Club is about as good a venue as you can get, to hear Volti. Passing for a poor man’s version of the Isabelle Stewart Gardner museum in Boston, the City Club played host to this “contemporary music chamber chorus,” that claims to be “singing without a net.” A better handle, I could not imagine for this startling 20-member group who takes contemporary choral works in places where few have taken them before. At the outset, Artistic Director Robert Geary noted that this music is about seeking something. In that respect, it shares much with its liturgical forebears, although going in a very different direction. Geary warned that the musicians “don’t spoon-feed you,” and that “this program was for intelligent people.” However, unlike much new music, this was incredibly accessible, if only because it was so very, very good.

The evening opened with a piece by Ruby Fulton, set to a poem by Jeff Brunell called “The Ballad of James Parry.”  The singers split into two groups, and used a hocket-like technique to interrupt the melody line and pass it between them. With piercing, abrupt rhythms, modulated by intense dissonance and volume contrasts, this piece set the tone for the balance of the evening.  It demanded a far more acute sense of timing than many traditional works – which Volti more than delivered on.

Genesis (2011), by Matthew Barnson, was the highlight of the evening. Barnson calls it a triptych, using three poems by Ted Hughes, Richard Siken and Alec Derwent Hope.  However, each functions well as a stand-alone composition.

The effect of the first could only be described as searing. The beginning of the second, a Siken composition called “Scheherazade”, started on a quieter note, providing a much-needed contrast before voices rose up, mimicking the horse hooves described in the poetry.  The voices cantered in regular rhythms before building to a siren at the end, making it impossible for the audience not to pick up on the repetition of the words “tell me,” that began and ended the poem. Volti split in two again for the performance of the last piece, a poem titled “Paradise Saved.” One side offered up the lyrics of the poem, while the other repeated a figure over and over, with tones ranging from breathy to keening, seagull cry to siren call, as if the true poetry lay in their lack of words.

“O Ignis Spirtus Paracliti,” from The Hildegard Motets, 1992-1993 by Frank Ferko and Voice (and nothing more) by Eliot Gyger followed. The Ferko work was sung with Volti surrounding the audience. This lovely piece was the most liturgical-sounding of the evening, and provided a gentle entry back into the music after intermission. The Gyger piece had a vivid coloratura that began with a quavering syllable, changing from whispery single syllables that sounded like a radio fading in and out before changing to a more expulsive stuttering sound. The evening closed with a work by Yu-Hui Chang, set to two Billy Collins poems.

Of the five composers who performed this evening, one was born in 1981, two were born in the 1970’s and one in the 1960’s. It is this musical conversation, between young composers and their audiences, that is so wonderfully generative. I’ve been reporting on more and more of this music, much of which is astonishingly good. This is the first choral new music that I’ve covered.  I look forward to hearing more of them again, especially their upcoming recording.