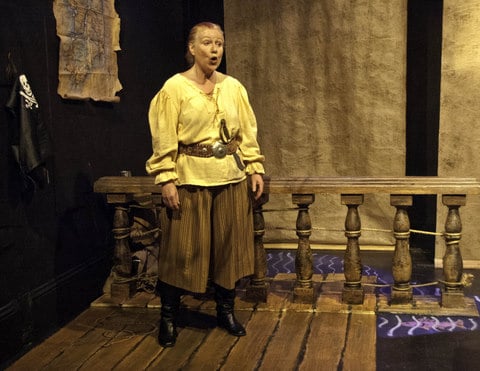 A Most Notorious Woman

A Most Notorious Woman is a one-woman show about Gráinne Ní Mháille, aka Grace O’Malley, the 16th century Irish pirate who was the bane of those with the temerity to fish along the shores of County Mayo, as well as those who supported the British stronghold in Galway. A reasonably cosmopolitan and educated pirate, she spoke Latin when she met with Queen Elizabeth.

Her story resonates with contemporary artists, as this script, originally published by Maggie Cronin in 2004, joins a burgeoning parade of songs, novels and biographies that have come out in recent years. A Most Notorious Woman starts when Mháille was a young girl. It takes the audience through her two marriages, the births of her four children, her meeting with Queen Elizabeth, and ends when she is 63.

The set on the tiny Exit Theatre stage was divided into several distinctly different areas, including sections of ship sails, a rigging wrapped with seaweed, a vaguely nautical-looking porch rail and a centrally-located ship’s trunk that doubled as a table and cache for props. Other appendages – such as the black outline of male character, popped out of the wall as needed. One could not help but be impressed with how effectively Augello uses the space around her, dipping behind a downstage sail to converse with another character, emerging from another with a slight costume change, and strutting upstage as a peeved Queen Elizabeth.

Unfortunately, the peeved Queen Elizabeth was the failing of the show. At the outset, Augello played Mháille in the best tradition of historical biography, which worked well for her. While I can understand the need to put considerable distance between Gráinne Ní Mháille and the Tudor queen, one would think there was enough space between the Irish pirate and the imperial majesty without the need to turn the monarch into a bad cross between Valley Girl and self-centered ingénue with jewel-encrusted cell phone in hand. This came off as a Monty Python imitation of Masterpiece Theatre – and not in a good way. Even worse, it gave the feeling Augello wasn’t taking her characters seriously. I don’t know how much of this was inherent to this script, and how much devolved from this production – but I’d like to think it was from the script, if only because Augello mustered such genuine feeling for her character at other moments.

This one-woman show, with its multitude of characters, was demanding at best. Switching rapidly between father, husband #1, husband #2, Queen Elizabeth, Gráinne Ní Mháille and more, all in accent, is close to impossible in an intimate venue like the Exit. However, a very avoidable blurring between characters happened all too often as Augello started the lines of a new character, without having completely abandoned the physical persona of the first.  I suspect this was more attributable to opening night nerves, and trust that it won’t dog future performances

This year’s DIVAfest continued its focus on historical drama with Eleanor, a treatment of the story of Eleanor of Aquitaine, which opened immediately after A Most Notorious Woman.

A Most Notorious Woman