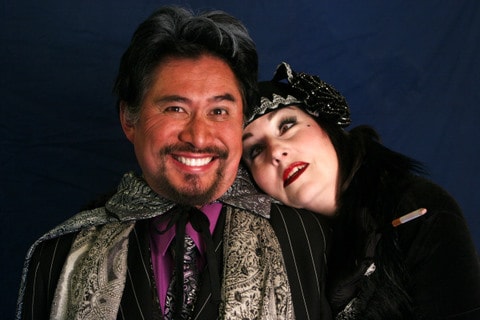 3 out of 5 stars - 'Worth a Look'
Hillbarn Theatre, Foster City
Directed by Bill Starr
Ron Lopez, Jr - Man in Chair

With a seventy-year track record of serving up theatre standards (or soon-to-be standards) Hillbarn Theatre reliably delivers. They may not have the most adventurous programming, but they know their audience well – and keep them happy indeed. Their seventieth season went out on a high note with a production of The Drowsy Chaperone.

With strong actors, an excellent set, killer dance numbers and jewelry that glitters all the way up to the back row, Hillbarn Theatre’s production of this play is one of best I’ve seen. There’s a lot of competition for that place because ever since MTI released the rights to Drowsy Chaperone last year, everyone from Diablo Theatre in Walnut Creek, Woodside Community Theatre, Children’s Musical Theatre in San Jose and a half-dozen other amateur theatres up and down the peninsula have been vying for rights.  However, Hillbarn’s was so unrelentingly entertaining that the hour and half production flew by.

Described as a musical-within-a-comedy, Drowsy Chaperone is perfect light entertainment for a fun night out. Ron Lopez, Jr. plays the curmudgeonly Man in the Chair. He’s our reliable commentator on “The Drowsy Chaperone,” a spoof on a 1920’s music, that is enacted before us.  Lopez was so fabulous I wanted to bring him home and plant him in my living room for more ongoing commentary. If an overweight, somewhat overwrought middle-aged, whiny nebbish can be an oracle, Lopez has it down as he expounds at length on the action on the other side of the stage. All the good lines of the play belong to him:

Since Lopez is so good, we suspend our disbelief and get pulled into the action on the other half of the stage – a dippy 1920’s musical comedy which suffers from every defect of that genre. This spoof trots out every conceit of the era and mirrors them back on itself.

Part of what made this production so much better than others I’ve seen was the excellence of the dance elements. While the first number, a bit called “Fancy Dress,” looked overcrowded and stiff, the company was clearly warming up because this awkwardness was soon behind them. Immediately going into “Cold Feets” Trevor Meacham (Robert) and Daniel Lloyd Pias (George) delivered a tight, suspenseful tap sequence.  ubsequent numbers – even ones in which the stage was packed with an aeroplane and fleet of aviatrices – had a phenomenal, infectious energy.

The comic timing of baker boys Stewart Kramer (Gangster #1) and Joey Montes (Gangster #2) added much to the production. Well-matched, these two provided a depth that balanced the saccharine silliness surrounding Janet Van de Graaf’s nuptials. If I were to see Hillbarn’s production again, I’d focus more on watching the reactions between these two because I know there were riffs between the two that escaped me. This great timing was shared by Don Cima, as the dignified Underling

Drowsy Chaperone is a strong end to a very special season at the Hillbarn. One looks forward to the beginning of their 71st season which opens with A Touch of Class.