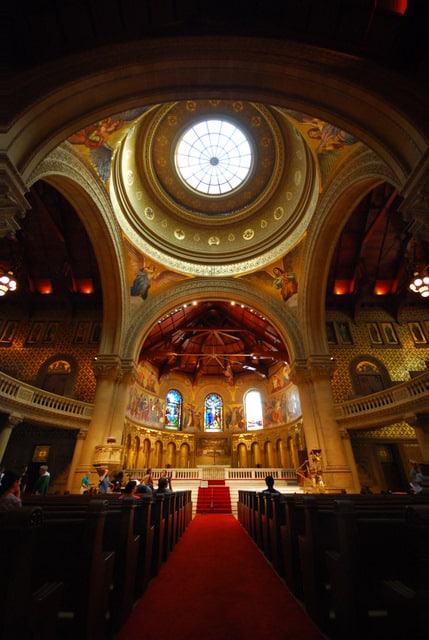 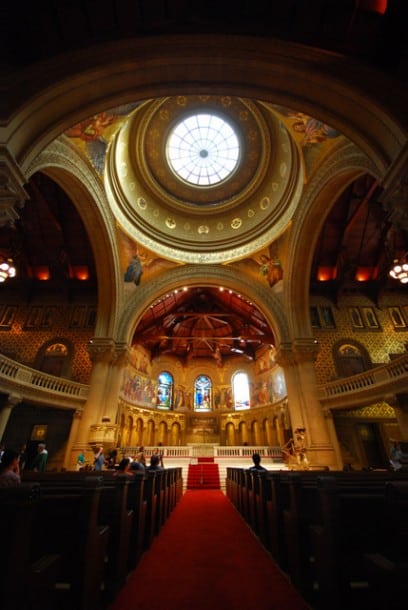 At 9:00 PM every Sunday during the Stanford academic year, something very special happens at Memorial Church. With the church plunged into darkness save for the lit candles on the altar, seemingly disembodied voices waft down from the choir loft for a half hour. People linger in the darkness afterwards, enjoying the hush silence and letting the music reverberate internally. Called Compline (pronounced with a soft i, rhymes with “calm pin”), this ancient tradition has enjoyed a renaissance over the past half century, before coming to Stanford in 2003.

Reverend Joanne Sanders, Associate Dean for Religious Life at Stanford provided the impetus for the Stanford Compline. When I first spoke to her a year ago, she told me that she was trying to replicate a phenomena started by Peter Hallock at St. Mark’s in Seattle in 1954. The Seattle Compline became wildly popular and garnered world renown during the 1960’s – a popularity that has not waned. Walking into Memorial Church when she first started at Stanford in 2002, Sanders immediately knew that Compline should be happening in this sacred space.

Sanders explained that Compline is one of the eight canonical hours set forth by St. Benedict in the sixth century. Canonical hours – also called canonical offices – are the fixed cycle of prayer throughout the day. Just as Muslims have a fixed ritual of praying five times a day, Benedict organized Christian prayer for monks into eight hours or offices, with elaborate instructions on when and what to pray.

Last month I had the opportunity to experience Compline at St. Mark’s. Grabbing the bus on a cold, wet Seattle night, my son and I arrived at St. Mark’s early. The official seat of the Episcopal Diocese of Olympia, St. Mark’s is a small boxy cathedral with water stains dripping from the windows. This did not deter the hundreds who piled into the church after us, filling the pews, sprawling on the steps to the altar, sitting along the sides of the nave with backs against the walls. It seemed inconceivable that anyone would venture out on a cold and clammy night, but just like they do every Sunday evening, approximately 600 to 700 people packed the church. These were not evangelical holy rollers waiting for some preacher to give them the word of God. Nobody passed himself off as some kind of religious social worker or offered salvation to the heavily studded and pierced kids. What was happening was more subtle, more quiet, transcending notions of a particular faith.

Singing in English, the Compline Choir of St. Mark’s wended their way through the ancient, unchanging half-hour service. Opening with what is called a bidding prayer, the leader intoned the words: “Beloved in Christ, be sober, be vigilant; because your adversary the devil, as a roaring lion, walketh about; seeking whom he may devour, whom may resist, steadfast in the faith” before the choir sang the hymn of the day, the Nunc Dimitis, Apostle’s Creed, Kyrie, and Lord’s Prayer, along with seasonal Collects and anthems.

Like all church services, the great part of this was unchanging, from service to service.  Just as you never expected one Grateful Dead concert to be wildly different from another, kids didn’t expect novelty here. While psalms, seasonal hymns and settings change from week to week, the overall structure remains constant.  For example, when I was there, the service included In the Bleak Midwinter and Biebl’s familiar Ave Maria, both of which are relatively new, having been written in the 1900’s.  Within these limits, this experience was recognizable as a Compline services hundreds of years ago. Indeed, some of the music – such as the Nunc Dimittis Tertii Toni – dates to 1590.

Compline at Stanford is very different. Reverend Sanders originally asked Stanford professor William Mahrt to organize a choir to sing Compline. However, since those first days, the Stanford Compline evolved into one sung by a rotating cycle of eight local choirs, including groups from Trinity Lutheran in Palo Alto, the Stanford Ensemble, Christ Church Portola Valley, All Saints Episcopal and others.  Reverend Sanders is keenly aware of how this opens the magic of Memorial Church up to the community – and speaks passionately about the importance of having young people – such as the group of Palo Alto High School – experience singing or appreciating Compline and the respite it provides from the world.

Some groups, such as the Early Music Singers, sing almost exclusively in Latin.. Other groups like the Threshold Choir, an all-women’s group from Santa Cruz sing entirely in English, and have a very different take on the material. Latin or English however, certain elements are shared by all. The Lord’s Prayer is invariably sung, along with the familiar responsory “Into your hands, Lord, I commend my spirit.”  Even a tiny choir sounds magnificent as the crystal clear sounds fill the air. As one singer mentioned, the acoustics of Memorial Church are incredibly forgiving, as the voice reverberate, filling the darkness.

The Stanford Compline is open to all.  It can be anything from anything from a peaceful end to your weekend – or like it is in Seattle, a hot date with coffee afterward. With plenty of parking on the oval at the end of Palm Drive on Sunday nights, campus is surprisingly accessible. Compline dates for the balance of this quarter include: