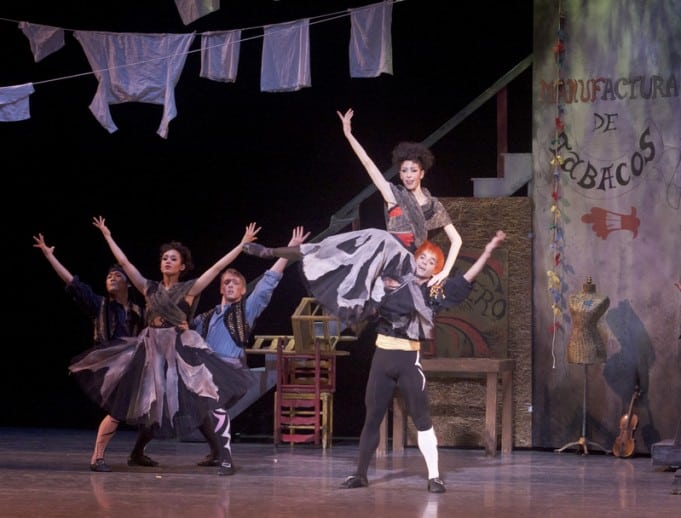 I’ve always had a soft spot for Ballet San Jose and Dennis Nahat. Given the financial issues of 2000, it always seemed like a small miracle that San Jose has a ballet company at all. But for the persistence of Dennis Nahat, we would be without this treasure. With that history in mind, the opening of Carmen seems all the more magical.

Carmen is a surprisingly new ballet, choreographed by Roland Petit in 1949. In Apollo’s Angels, dance critic Jennifer Homans reminds us that Petit was a man of style “with an unerring instinct for commercial taste and fashion,” who “correctly perceived that the vitality of French culture in the immediate postwar years lay in the theatre, burlesque and film.” Homans notes that Petit revitalized dance by “pulling it down to a lively popular and street culture born in part of the war.”

This impulse is immediately evident in Nahat’s conceptualization of the piece.  Costumes and scenery by Antoni Clavé balance grittiness against style as only the French can. This was particularly at work in the Act I street scene outside the tobacco factory where most of the corps is employed, and in the Lilas Pastia tavern where Don Jose (Jeremy Kovitch) dances with Carmen (Alexsandra Meijer). Lighting designs by Kenneth Keith were bold and dramatic, causing the audience to focus on the huge oversized shadows of Carmen and Don Jose in the final fatal scene. The fusion of burlesque and ballet enriches both.

If there were any flaws in the performances by Kovitch and Meijer, this reviewer was oblivious to them. While Meijer’s character seemed more informed by Sally Bowles-type scattered energy and hair style than a deeply sensual Carmen, this was nonetheless effective, and all the more interesting for it. The dominant stage presences of both Kovitch and Maximo Califano (as Escamillo) provided a much-need counterbalance against Meijer and the balance of the corps. If you could only saw one ballet this year, Carmen would be an excellent choice.

Unfortunately, George Ballenchine’s Who Cares? was less effective.  In fact, the quality of the Who Cares? and Carmen were so far apart it was inconceivable that they were performed by the same dancers. Given that this was the opener of the show, the discrepancy was unfortunate. With a single drop showing a vaguely 1970’s type image unrelated to the music or the dance, the initial dances seemed to be little more than warm up exercises. Opening with Sweet and Low Down (1925) and Somebody Loves Me (1924), the corps had a mechanistic feel, as if they were dancing some kind of techno rendition of the Gershwin tunes. If these were easy feel-good tunes, nobody told the dancers, who seemed to have more in common with wind-up dolls. Moves were so unsynchronized, they were distracting, as was the accidental fall of a dancer.

Fortunately, the bugs got worked out as the ballet proceeded. While the first few dances required many dancers, quality improved as the work turned to a series of pas de deux and solo performances. Performances by Makel Solas were particularly engaging as his easy moves worked well with this music. When the entire ensemble returned to the stage for I Got Rhythm (1930), whatever issue bedeviled the initial pieces were entirely gone.

This is the end of the season for the Ballet San Jose. I’ll be waiting impatiently to find out what they are doing next year.