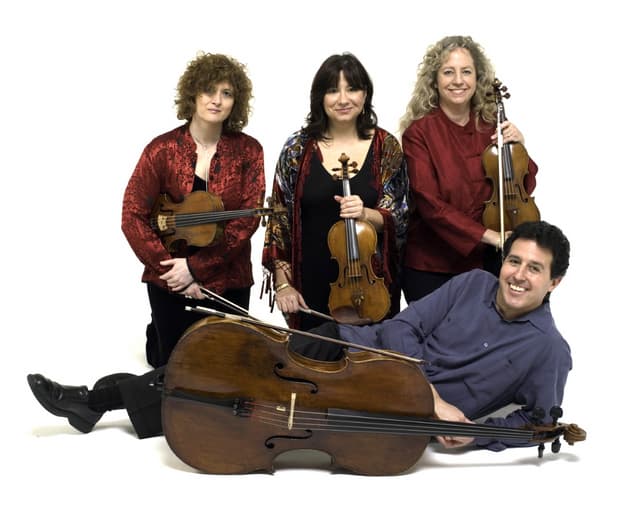 3 out of 5 stars - 'Worth a Look'
Bettina Mussumelli ~ Violin 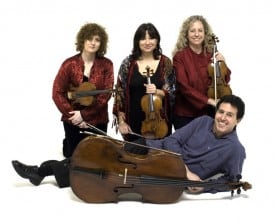 The Ives Quartet hosted their second salon of the season on Sunday. Introducing a work-in-progress by Elinor Armer, the audience got to be part of a special conversation as Ms. Armor deconstructed this work, for players and the audience, correcting typos in sheet music as musicians played. This kind of experience is almost unknown for audiences in the Bay Area. The few open rehearsals that do appear on arts calendars inevitably feature works that are complete and performance-worthy. This shields the audience from the process, hiding as much as it reveals.

Originally from Oakland, Armer was appointed to the faculty of the San Francisco Conservatory of Music in 1976 where she was head of the composition department.

A congenial woman, she speaks about her music in impressionistic terms. She tells of geometric figures, train whistles, gateways and road trips in the music, a convention that works well with a relatively untutored audience. One senses that she really thinks in these terms, weaving such images into an explanation of the larger architecture of the piece. Violist Jodi Levitz noted that this insistence on architecture is found in much of Armer’s music. I appreciated her pointing this out, as new music often leaves the listener rudderless.

While the quartet approached various sections of the work, the conversation briefly turned to bowing techniques for a particular passage. This gave the audience the chance to listen to violinist Susan Freier play something both sul ponticello and sul tasto.  Not being a violinist, this cracked open the door a wee touch into how the magic is made.

The afternoon ended with the Ives Quartet playing a significant portion of the work. While this remained incomplete, it gave the audience a greater sense of how all the various sections that Armer discussed might fit together. The piece itself provided huge contrasts in texture and color, including everything from a lovely cello ostinato with conventional harmonies to dissonant passages packed with tension.

Although this work was raw and unfinished, the intimacy of these salons makes them worth returning to again and again. Sitting six feet from Bettina Mussumelli’s powerful violin performance is always an experience unto itself. I suspect we may have a chance to reexperience this piece when the Ives Quartet returns in May, to perform works by Haydn, Brahms and Armer.