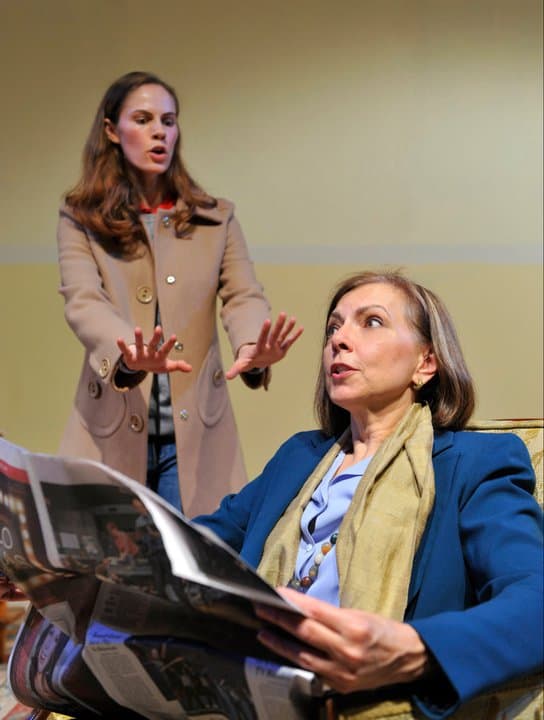 3 out of 5 stars - 'Worth a Look'
Essential Action Productions 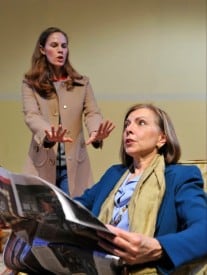 Collected Stories is about time, love, mentorship, humility and aging. It’s about dealing with each other tenderly, across the chasm of time and experience – and it’s about writing. The press release for this production suggests a more limited story – a more two-dimensional one related to the ethics of using another’s life story as material.  However, this show is far richer than that.

This is the first production of the brand new Essential Action Productions. Although no other works appear to be in the offing just yet, if this first show is any indication, we may anticipate good things from them. Neither Carolyn Power or Loring Williams pulled any punches in this production.  Given that we all seem to be recovering from some self-inflicted surfeit of irony, the unflinching emotional honesty of this show was a relief. However, grad students beware – this is not easy material – particularly if you’re struggling with negotiating a relationship with a thesis advisor.

Part of the reason this story works so well is that we know these people. Cast as grad student Lisa Morrison, Loring Williams is a mess of insecurities ,coupled with cock-eyed bravery. Ruth Steiner, played by Carolyn Power, is the curmudgeonly older woman who wears her frailties comfortably, albeit with jaundiced humor. We watch the relationship between the two evolve over the space of six years.

So much is right with this production. Carolyn Power can do more with a quivering upper lip and and slightly furrowed brow than anyone I’ve seen in long time. The last scene of the second act was so overwhelming, it was a relief to see her bounding back on stage intact, with a beaming smile for the curtain call. Likewise, Morrison’s’ eagerness to please, coupled with an easy disingenuousness make us wish she’d hurry up and grow up, while at the same time we smile, perhaps at our younger selves.

Waiting for the play to begin, the audience faces an open set and tries to place the play in time. The small electric typewriter, Trimline phone, tiny boom box, and photo of the Afghani girl from the 1984 National Geographic cover signals a time period, just as the planted pothos signal that this is the living room of an older person. This focus on time carries over to the notation in the program, indicating the month and year of each scene. It’s because of this incessant focus on time that the “Tina Fey – Bossy Pants” screams out from the back of the newspaper that Lisa Morrison reads. This one false note aside, scenic design and props are a win, especially for a small theatre like Stage Werx.

In choosing a Margulies script for their debut performance, EAP also offers up a wealth of one liners from both characters.

“I write better than I talk so I should shut up.”

“Where is the drama if there’s nothing at stake?”

“The definition of success means putting up with a higher echelon of assholes.”

Great dialogue like this keeps this play moving quickly.  Fast paced, one would never realize that it spans two and quarter hours. Only the very last scene drags – and then only because watching the impotence of Steiner in the face of Morrison’s disingenuity was painful to watch.

Collected Works is a strong start for this fledging company. Hopefully, we will be seeing more in the months to come.