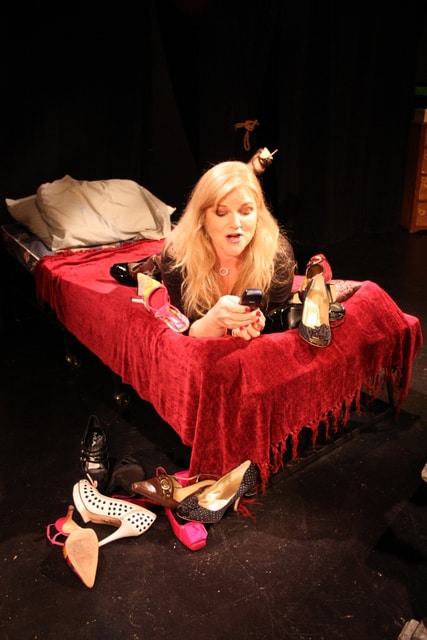 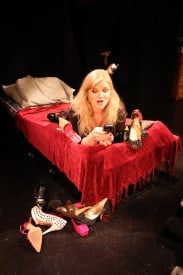 Bad Dates is substantially different from previous productions at the Dragon. For starters, there’s nothing spare about the set of this second show of 2011, which opens to a woman’s bedroom. Despite the restrained Frank Sinata playing in the background, this is equal parts adolescent lair and middle aged bedroom, redolent with Nine West, Jimmy Choo’s, Boutique Nordstrom and Me Too shoes strewn across the bed and floor. With the ubiquitous Big Brown Bags, this is someone we know – or at least think we know. The set itself is cut on the diagonal with two doors through which a closet is revealed and through which Hailey Walker  (Laura Jane Bailey) enters and exits.

Bad Dates is a one-woman show – with all the tension and potential for boredom that such shows entail. However, Hailey Walker just takes you in, as crazy women often do. Both vulnerable and brassy, we find her incredibly plausible. Part of plausibility is derived from  some of the more subtle, well conceived aspects of costume and makeup. I confess to being entranced by her blue grey nail polish – and how seamlessly it went with her blue eye shadow. Details like these can give a middle aged woman in frumpy, grey sweats with hair that’s gone seven ways since Sunday a modicum of credibility that would otherwise be lacking. It’s hard to looking entirely crazed when these details are held together – and Laura Jane Bailey excels at knowing just how far the emotional extremes of this character can be pushed.

One man shows easily become tedious, as we tire of an inescapable narrator. Maintaining a hour-and-a-half conversation with the audience is no easy feat, but Bailey pulls it off with all the warmth and ease that her character can muster. The lack of other characters on stage doesn’t matter because we see a whole panoply of Hailey Walker’s associates through her eyes. The perpetual movement of this show also prevents it from getting tiresome. Walker moves constantly, changing her clothes more times during this show that most teen-aged girls. Restlessly, she’s in and out of her closet, in and out of her shoes, on and off stage, consulting an invisible daughter,  only to change her focus and return back to your face for a strictly entre nous conversation. This motion makes effective use of the small Dragon stage to open up the personal of this character. Elements of unpredictability –  in terms of plot as well as fake endings of the first act in which Bailey exits the stage, leaving the audience waiting for the houselights to come back up – keep the audience on it’s toes.

This type of show is where the Dragon is at it’s best. Meredeith Hagedorn rarely makes a false step in her selection of material. Her choice of Theresa Rebeck’s play revealed a side of the Dragon that audiences don’t see often. While sets this lush could easily be overstepping for this type of venue, the Dragon is far too smart to make such mistakes.

Bad Dates will leave you laughing, and with a heart a little more open than you came in with. Dare I say, it makes for a very good first date.