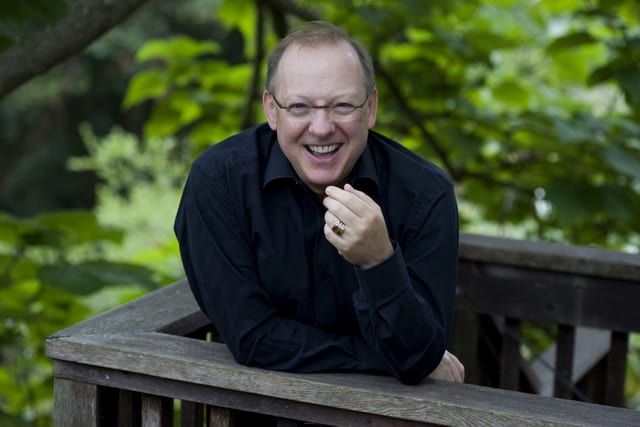 Zheng Cao: The Life of a Singer - Philharmonia Baroque Orchestra

Baroque music will never become relegated to a museum as long as Nicholas McGegan has baton in hand. For starters, the dear man simply bounces on his heels too much for that to ever happen. More importantly, however, shows like this demonstrate how the Philharmonia Baroque Orchestra (PBO) reaches both to the past and the future to keep this music vital.

Friday’s concert at the Herbst opened with Jean-Féry Rebel’s Les Caractères de la Danse. This series of short dances premiered in Paris in 1715 – just at the zenith of the French baroque. With the Danse arcing from Prelude, Courante and Menuet, to Gigue, Rigaudon, Passepied and others, it could easily have become very predictable – but such was not the case here. Opening with lightly ornamented violins, there was a lovely measured balance to this piece, even during its most spritely gigue. Delicate flutes over the harpichord continuo were tidily balanced with cello and bass. Percussive elements added welcome notes of color. This choice of material allowed the audience to see composer McGegan at work. Although these dances were popular during their time, today we lack the entire score as the abbreviated form provides only hints as to orchestration. McGegan seamlessly filled this void, adding additional parts for wind and strings, modeled after Rebel’s Les Elements.

Mezzo-soprano Zheng Cao joined the PBO to sing Handel’s Scherza Infida from Ariodante. Mezzo-soprano refers to one whose voice falls between soprano and contralto. The deeper voice has a darkness and depth often missing from the soprano, and altogether fitting for this anguished, grief-struck aria. Cao held the audience in her hand for the duration of this piece before the last words “per tua pena io tornero” (I will come to haunt you) faded away.

Cao’s aria was immediately followed by selections from Christoph Willibald Gluck’s Orfeo ed Eurdice. The Herbst has been hearing a lot from the doomed couple of Orfee and Eurydice, first from Ensemble Parallel last week, and now from the PBO. Gluck’s Orfeo is a transitional piece, probably as unlikely in its time as Glass’ take on the same plot was in the 1990’s. Purged of the over-ornamentation common to the late baroque, the beauty of Gluck’s Orfeo lies in its simplicity. Like other Italian baroque operas, spectacle and drama are more integrated.  Text isn’t lost in overly ornamental flourishes, following instead a particularly democratic “one-syllable-one-note” pattern. This piece was a hit well up to the 19th century. The music was even found among Jane Austen’s effects as she sung it with her friends.

The selections from Orfeo ed Euridice opened with the Dance of the Blessed Spirits, beloved by flute fans everywhere. The piece begins with a pair of flutes and violin playing over a harpsichord continuo. One flute falls out, leaving Stephen Schultz with the achingly sad solo that resolved back into a duet. The piece recalled a recent email from a friend to the effect that it’s hard to understand how some people don’t sense this music to be as emotional as the later classicists and romantics. Zheng Cao’s short aria Che fara senza is sung by Orfeo as he contemplates how he will go forward without Eurydice. I confess, I was somewhat surprised to find this sung by a woman – but that being said, Cao’s performance was spellbinding. She returned to the stage after the Chaconne, to present “a little bon bon” to the audience, as McGeegan called her encore.

The shock and awe of the evening followed intermission with a work by Nathaniel Stookey, born in (gasp) 1970. Stookey’s score for Into the Bright Lights included the lyrics of Frederica von Stade, who was originally scheduled to perform. Stookey himself has roots with the PBO, having sung with them as a 17 year old. Central to the piece were the hints of Carabino (a piece sung by both Flicka and Cao – who both donned buckles worn by Maria Callas for the occasion). Other baroque references, including the initial violin solo and the florid ornamentation, work their way in as well. Cao’s presentation of the medium-length work offered moments of modernity, and laugh-aloud humor, and passion and pathos. Cao is so intensely female, and so open to the vulnerability of this role, that hopefully we’ll see her stepping into the bright lights for decades to come.

The concert closed with an opera-ballet by Jean-Philippe Rameau that perfected balanced the Rebel that started the concert. A drum-like wooden barrel had dominated stage left throughout the entire performance, piquing the audience’s curiosity. This matter was finally resolved, as it turned out to be a “wind machine” cranked by percussionist Kent Reed.

The PBO will be releasing a new CD shortly. This is intended to be the first of three releases for 2011 on their own new recording label. These look to be a splendid series of disks that I hope to hear soon.

Zheng Cao: The Life of a Singer – Philharmonia Baroque Orchestra