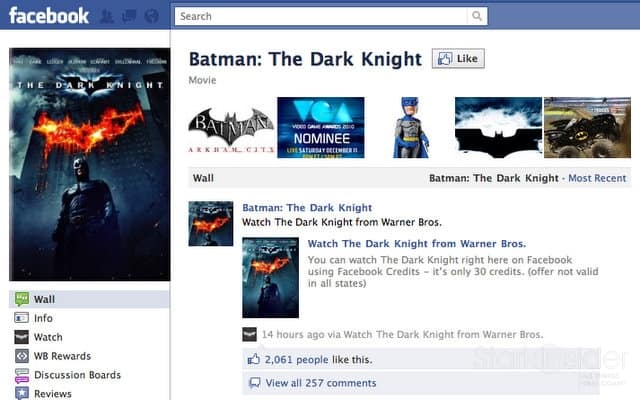 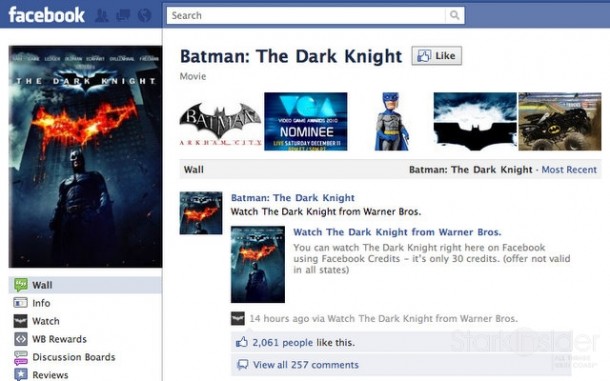 Watch out Netflix, Facebook is testing the online rental movie business. The Warner Bros. film The Dark Knight is the first be available for rent on the social networking site. If it works, look for the Palo Alto-based tech giant to add more. To watch a movie, you visit the film’s Facebook fan page. There you have two options to pay: $3 cash, or 30 Facebook Credits (does anyone use those?). The movie then streams in a separate window via an app which you must grant access to. The rental is for 48 hours which is consistent with the competition.

With a $10B + market cap, Netflix has crushed Blockbuster, and gained an early lead in the bid for next generation movie rental giant. Others such as Apple iTunes, Amazon and Hulu have also had success. In this world of high-bandwidth and mobile entertainment (e.g. iPhone, iPad, Android), the death of DVD and Blu-Ray is but assured.

To be clear The Dark Knight is being offered by Warner. You can bet, though, Facebook has been more than agreeable in helping the studio find a way to use their web site as a distribution channel.

But does the movie rental business fit well with social networking?

With past add-ons, Facebook has integrated services that made sense in the context of its social platform. Places, for example, is a Foursquare copycat that allows users to “check-in” and update their status so others can follow them. That makes sense. It’s a social extension. Its recently upgraded photo uploading and viewing service (now with ads) is another example that makes sense: Look at my apple pie! Hi grandma from the Eiffel tower! These types of activities graft seamlessly onto our everyday social activities.

Netflix, however, broke through for different reasons.

One was its recommendation engine. After you’ve watched enough movies, it suggests others. It’s like having your own personalized Robert Ebert at your beck and call.

Then there’s the selection. At over 100,000 titles, it’s huge (although the streaming library is quite smaller).

Regarding social fit, watching a movie is really anti-social. For the most part. Sure you can throw a party have the gang over to watch Inception. But while the film is playing- presumably- you’re all in your own fantasy worlds, individually watching the movie. That’s not the Facebook way. Where’ the engagement?

“Facebook has become a daily destination for hundreds of millions of people,” said Thomas Gewecke, President of Warner Bros. Digital Distribution. “Making our films available through Facebook is a natural extension of our digital distribution efforts. It gives consumers a simple, convenient way to access and enjoy our films through the world’s largest social network.”

Following the footsteps of social gaming? (i.e. it could be H-U-G-E)

Still, many will argue that the millions of users on Facebook already engage in solo activity. Very successfully. That market would be: games. Farmville was a rocket ship, and created a cash cow… not to mention an a new industry in the process. Social gaming is huge. So maybe social films will be too. After all, when you’re looking for a movie recommendation, most of us turn to a family or friend first.