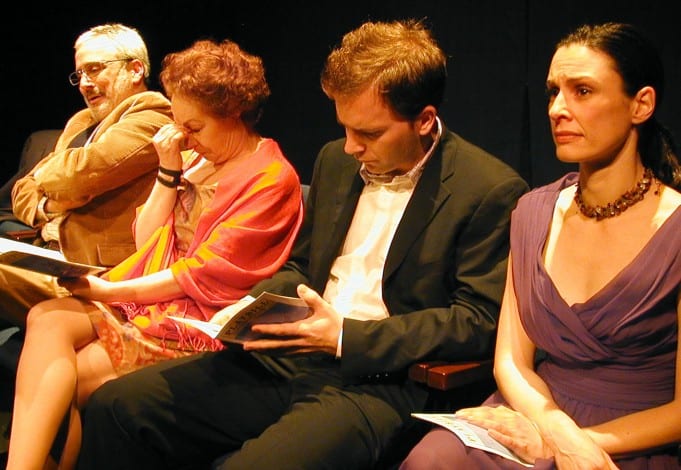 Lady Grey (in every lower light) and other plays 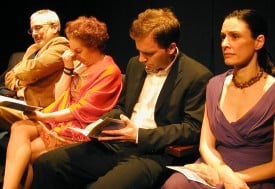 You know you’ve got it good when a reviewer debates whether the quality of the acting or the quality of the script is why a play worked so well – and that really is the chief question underlying last night’s performance of Lady Grey (in ever lower light), presented by the Cutting Ball Theater.

Small and intimate, the EXIT Theatre’s small black box stage places a heavy load on the cast and crew, as every false move is magnified ten-fold.  This wasn’t an issue for Galen Murphy-Hoffman, Danielle O’Hare, Gwyneth Richards and David Sinkaiko, the four-member cast of the three one-acts. Director Rob Melrose must have been working his own variety of exorcism because the inevitable dropped cues and steps out of the character’s skin that we politely try to ignore on opening night just weren’t there. Instead, the wall between stage and house seemed to vanish.

Will Eno’s three scripts walked a fine line.  Although I love theatre about theatre, I understand how it makes others impatient. However, this was different because it cast an unsparing light on audience, just as much it exposed the actor’s craft.

The evening began with a longish monologue by Danielle O’Hare.  Quirkly and self-referential, O’Hare can do more with her cheekbones than many actresses can do with the entire body. Her performance walked a fine line here as she reminds us of the drama of our younger selves as much as she reveals her character. However, seconds before you become tired with this girl, the act ends, leaving you mesmerized. 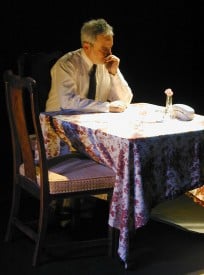 The last of the one-acts, Mr. Theatre Comes Home Different was the weak link of the evening, which I suspect is as much due to the emotional balancing of the content as anything else. Embodying “Mr. Theatre,” Sinaiko is a striking actor who delivers a powerful performance here – unfortunately at a time when the audience is looking for resolution.  What could be played as high drama edged into self-indulgence and lost the audience.  However, this had as much to do with timing – and I’m not sure how it could be resolved.

In his program notes, director Rob Melrose reminds us that the New York Times hailed playwright Will Eno as a “Samuel Beckett for the Jon Stewart generation.” This characterization is on the money as it bridges Beckett’s spareness and relentless focus with humor, letting the audience in on the conversation.

Melrose seems incredibly busy, as he’ll be directing three other Cutting Ball shows – all before June 15th.  I’ll be looking forward to these works – as well as Tontlawald, which opens on May 13th as part of the Cutting Ball’s New Experimental Plays Festival.  Hopefully, these works will be as smart as tonight’s last night’s performance.