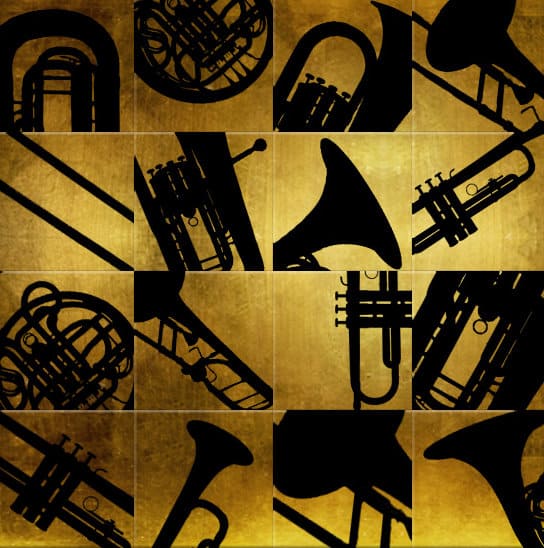 Richard Wagner supposedly said something to the effect of “Don’t look at the trombones, it only encourages them.”  However, Wagner was wrong about many things, and this is certainly one more for the list.  If you never thought of the trombone as an melodic instrument, listening to Bay Brass will clear up that misconception – along with many others.

However, as usual, I’m getting ahead of myself.  Bay Brass consists of musicians from the San Francisco Symphony, the San Francisco Ballet Orchestra, the Silicon Valley Symphony and the San Francisco Opera Orchestra. These guys (a gender-neutral term) are the best of the best, and when they’re having fun with their music it shows. Accessible and packed with dramatic tension, you’ll never think about brass the same way again.

Sunday’s concert celebrated the release of their new CD, Sound the Bells! The evening opened, appropriately enough, with John Williams Fanfare for a Festive Occasion. If you ever labored on the misconception that all brass sounded like Herb Alpert, this concert would have shaken that notion right out of you.  Unlike other brass performances, the sonorities and colors of this were highly variable, ranging from the  tension packed into the Finale Suite for Five Trumpets, to the deep resonance of the horn in Lobet Herrn, to the quiet restraint of Morten Lauridsen’s O Magnum Mysterium. Hearing anything by Lauridsen is always a pleasure – and one I didn’t anticipate finding here. This piece glows with a quiet nobility. The crescendo roughly two-thirds into the piece leads to the expectation that it would end there, but it surprises you as the music stills and insistently goes some place else where it quietly resolves with grace and perfect harmony.  One could want no more.

After intermission, guest conductor Bruce Broughton took the podium for his performance of Fanfares, Marches, Hymns and Finale. Listening to this work in it’s totality, instead of the short snippet that appears on NPR’s election programming was a treasure. I was surprised to learn that this work had been specifically commissioned for Bay Brass. Premiering in 2002, it has quite taken on a life of it’s own.

With the critic’s need to find something to gripe about, my only lament is that Aram Khachaturian’s Sabre Dance didn’t make it to the CD. Performed by four trombones, the pulsating intensity of this piece was broken only by the searing, downward arches of notes. I’ve heard many versions of this and nothing’s come close to this electrifying performance. Hopefully they’ll play it again at their next concert on July 12 at Stanford’s Memorial Church.

In the meantime, I’m holding out for new speakers. I don’t know if it’s possible to reproduce the depth and resonance of the music played by Bay Brass last night, but it’s worth the exploration because I’ve got to hear them again and again. If the new Bay Brass CD was eight years in the making, its the the least I can do.

5 out of 5 stars
Conductor ~ Stuart Chafetz