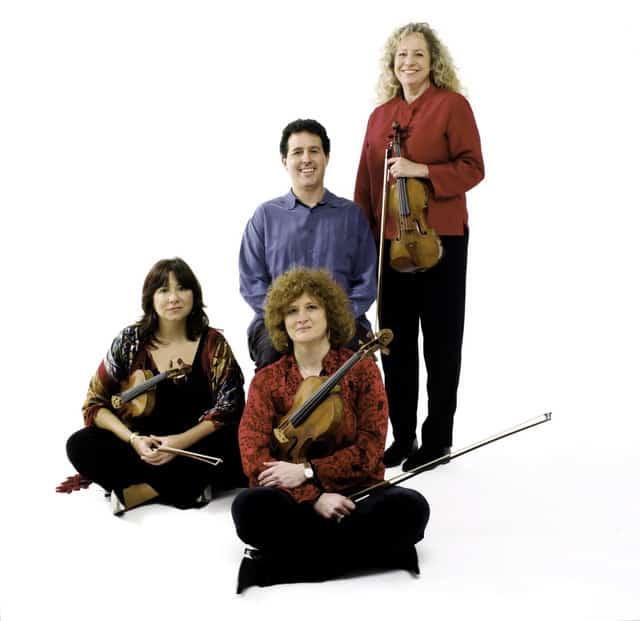 Presenting a program that spans 250 years and moves fluidly from Mozart to a 1924 Rebecca Clarke work, the Ives Quartet cannot be easily pegged, except perhaps by their very nimbleness. This nimbleness was clearly at work when a last minute change in the ordering of the program changed how the audience felt at the end of intermission. By ending the first half with Mozart, instead of the more ambiguous Clark, the Quartet changed the experience of the concert, leaving the audience on terra firma.

I’m getting ahead of myself here, however. Friday’s performance opened with two separate pieces by Rebecca Clarke, a violist and composer primarily active in the first three decades of the last century.  Both of these pieces highlighted the considerable talents of violist Jodi Levitz. I was unfamiliar with Clarke – and subsequent forays out to iTunes were surprising as they revealed almost 100 entries – albeit none for the Comodo et amabile (1924) that opened this performance. Although the Comodo began with gentle wandering tones suggestive of Debussy, the music became increasing agitated, unified more by the pizzicato notes on Harrison’s cello and recurrent motives rather than any melody line. This music deserves a serious listen, which why I was disheartened that this particular piece was missing from iTunes because I’d love to hear it again as I’m sure I missed much of the complexity the work. The second piece, Adagio, was similar in tone to the first. Program notes likened this work to that of Bloch. Harrison’s cello drone halfway through was wonderfully startling.

Mozart’s String Quartet in B-flat Major, K 458, dubbed the “Hunt” followed.  The brilliantly articulated trill, tossed back and forth between the players, made the first movement just plain fun as it wound itself way between the trill and a second melody line. Unlike the Clarke pieces, which were tended toward vertical organization, this was more accessible. This playful snippet burst forth again in the fourth Allegro assai movement, which offered up a new degree of complexity. So much is happening here that one marvels because the string quartet was a relatively new phenomena when this was written.  It was a wonder how the quartet could possibly sustain the energy and joy that went into this piece.  The audience was energized and awestruck when this piece drew to a rollicking conclusion.

A brief intermission was followed by Ravel’s String Quartet in F Major (1903). Detailed program notes helped audience members make sense of the sonata form of the first and fourth movements.  More than anything, I was struck by what a privilege it is to hear this music live. I struggled to follow each musician separately, but they sounded so good together, this was quite impossible.  The first movement came to an exquisitely gentle end.  With a rapid pizzicato attack by all four players, the second movement got off to a startling beginning. With hint of Spanish tunes, interspersed with chromatic passages from Freier and Mussumeli, I never knew a string quartet could possibly sound this way. The fourth movement began frenetically, only to dissipate, and build to an astonishing end.

Once again I’m struck by how very fortunate we are to have the Ives Quartet at the south end of the Peninsula.  With a magic all their own, this quartet plays with a precision, cleanness and élan that we often reserve for well established groups.  They may just be the best-kept secret on the South Bay classical scene.