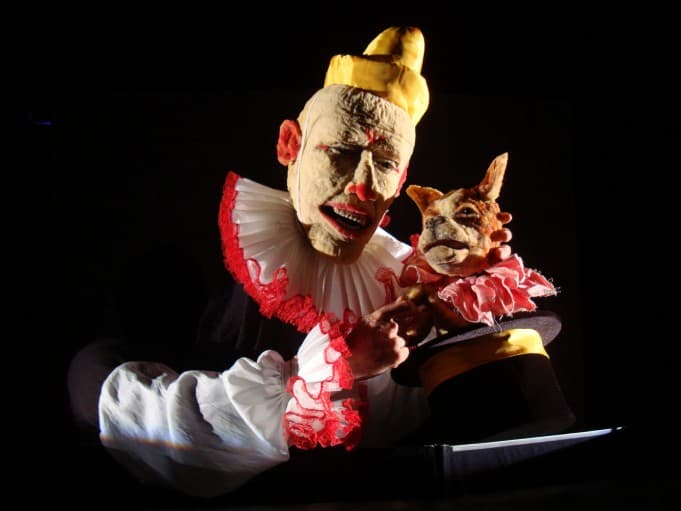 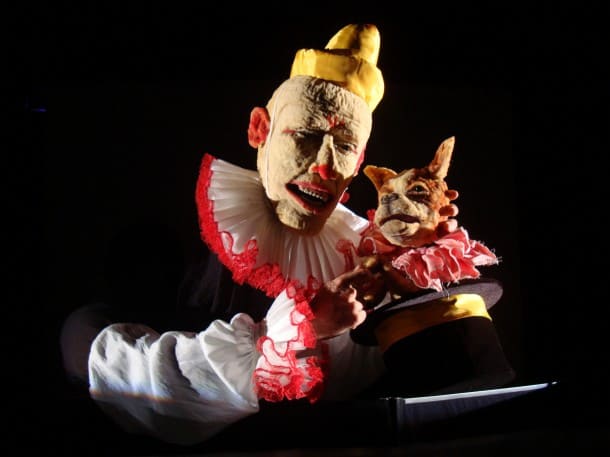 Sometimes reviewing is a little bit like a parent-teacher conference. You’re told your child is brilliant, a hard worker and a joy to have in the classroom. He has xyz academic strengths and particular social skills. This is all very nice, but as a parent, you know better than to be duped. You’re waiting for the key word: “but.” You wish the teacher would skip the preliminaries and cut to the chase with the “but.” Unfortunately, that’s what I’ll be doing here.

The hand-crafted puppets used in Hobo Grunt Cycle were brilliant. These weren’t your run-of-the-mill puppets. Beautifully detailed and emotionally evocative, it is easy to see how Kevin Augustine garners such fulsome praise for his work.  One rarely speaks of the skin texture of puppets, but these puppets were works of art unto themselves. Puppeteers  Joshua Holden and Adam Ende brought them to life, making all the audience fall for the puppet dog. Augustine’s performance as a white-faced Emmet Kelly tramp  clown was also admirable.  It is hard to pull off this kind of timing for an entire show. Augustine’s humor and pathos are unrelenting.

The script was so ill-conceived that the show failed to get off the ground. Time and time again, the audience was confused as to what exactly was happening on stage. Questions as to the significance of the small doll-like puppets that appeared periodically were never resolved. Had I not read the press release, I would have assumed that the second scene was about military K-9 units instead of dog fighting.

The first act was fragmented between circus scenes, wounded soldiers and Hobo, the dog. Augustine obviously knows dogs, because Hobo was the only element that seemed genuine. The scene in which the clown tried to get children’s letters to God by setting them on clouds came off as maudlin and manipulative. The second act,  three quarters of which was devoted to watching dog-torture, was even worse. 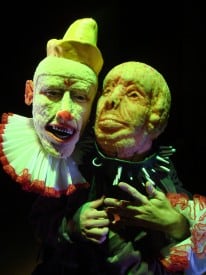 Passing off anti-war messages as art is hard. The best of it, such as All Quiet on the Western Front and Catch 22, was written by people who had fought the fight. This kind of authenticity was lacking in this play. Augustine seemed overly ambitious, going in multiple, disjoint directions that undermined the structure of the script.

The production integrated footage from various wars. Given that the press release describes this as “the history of American warfare, ” and the footage was largely U.S. soldiers, this seemed as much a condemnation of U.S. policy rather than an anti-war screed. If this was Augustine’s intent, it is unfortunate that so much of his footage was from World War II, which most people believe was worth fighting. Such gestures antagonized the audience, as did putting military gear on clowns. Since a coherent message was lacking, Augustine didn’t seem to be  taking his subject seriously.

It is unfortunate that the script was so seriously flawed because Augustine’s work has so much going for it.I’d love to give Lone Wolf Tribe a second look in the future.