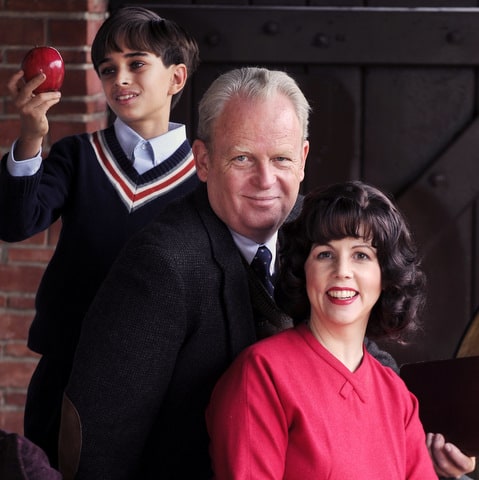 Getting one’s biases out of the way is important. I’m no fan of C.S. Lewis. Questions about why God lets us suffer don’t keep me up at night any more than eighteenth century notions of theodicy set my brain cells spinning. Given these biases, I’m amazed at how much I enjoyed the first act of Shadowlands, a play about C.S Lewis and his relationship with American divorcee, Joy Gresham. Great acting, tight dialogue and good costuming work a magic all their own.

Cast as C.S. Lewis, Fred Sharkey opened the play with a pensive monologue. Just before this got a bit too long, the curtain opened to the jokey, clubbiness of Oxford dons with all their delicious one-upsmanship that’s scintillating to watch. Doing accent work is hard.  Pulling off a scene like this with any authenticity whatsoever is hard.  Getting the timing that made this scene work so well is hard. Director Marilyn Lenghbehn made this scene – and others like it – positively sing. I’d happily take John Anthony Nolan (Major Warnie Lewis) home and deposit him in an overstuffed chair in my living room.

Also worth noting was how effectively Lenghbehn brought the audience along to appreciate Lewis’s heart throb, Joy Greshham, played by Trish Tillman. With a grating voice, Gresham is as initially off-putting to audience as she is to Lewis’s Oxford colleagues. However, slowly throughout the first act, we come to see her, at least somewhat, through Lewis’s eyes. While she always remains as much an outsider to the audience as she does to everyone but Lewis, we appreciate her caustic wit and authenticity. She’s clearly a woman who knows her own mind and isn’t afraid to show it.

Unfortunately, this tension didn’t carry over to the second act. The die was cast in the last minutes of the first act in which we see Gresham fall to the floor in her new flat, seconds after Lewis exits the room. At that point, we can write the arc of the second act, with its cancer diagnosis, remission and subsequent decline, ending with Lewis’s last monologue, the words of a thoughtful man, lost in his grief. However, the only interesting things here are Lewis’s religious scruples and the rationalizations he summons up to justify marrying Gresham.

Why the second act failed remains unclear. Carried forward largely by Sharkey and Tillman, the quality of acting was incredibly high. One continued to be drawn in by Lewis, who remains a surprisingly noble character. However, the very predictability grates and one gets impatient with the characters.

In real life, Lewis had an enormous sense of privacy, which is inconsistent with the very public death, happening night after night on stage, and I wonder if this inconsistency lies at the root of why the second act seems ineffective. Lewis published his journal notes about grieving his wife in 1960. Although initially published under a pseudonym, it was re-released under his own name after Lewis died in 1963. His intense privacy about this matter stand in uneasy opposition to the playwright William Nicholson’s attempt to give it voice.

If you like Lewis – or the issues about love and death speak to you – my nits may seem small and petty. However, I’m holding out for Altar Boyz, which opens on May 23rd.