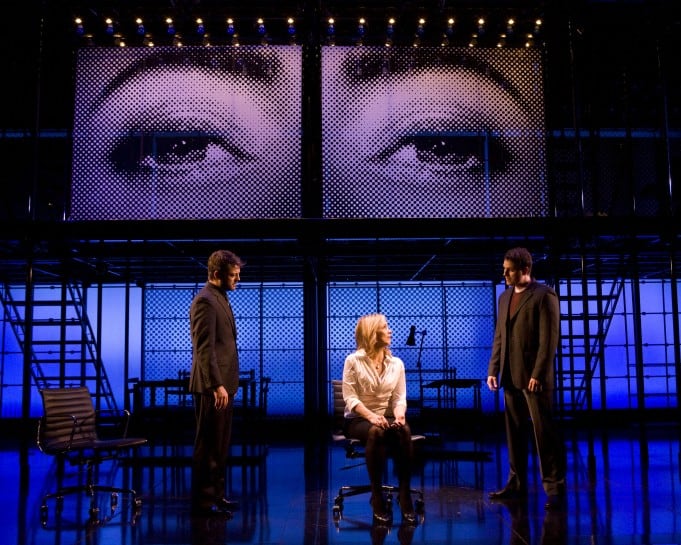 In the old days, an audience could be overwhelmed with a humongous cast, all on stage in a massive musical number in which character actors riffed on smaller bits of action to catch the eye. Overwhelmed by details and swept along with the music, the audience would inevitably give in and give it up to the drama.

We’re different now. For starters, we demand more sophisticated action, which is good because no one can afford the huge casts any more. With different sound and light technology, there’s new tools to capture an audience – which is precisely what happens with Next to Normal. With electrifying rock music by Tom Kitt, and a stunning lighting design by Kevin Adams, the audience doesn’t stand a chance.

The play opens with the electrifying “Just another Day.” The sheer volume and lighting effects of this piece overwhelm. With everything from insanely overworked students, pill-popping soccer moms, truculent teenage boys, and husbands trying to be one step above it all, the number mirrors us back to ourselves, provides absolution and renders us profoundly vulnerable to whatever happens next. This opening number is no small feat. Regardless of your opinion of what follows, you’ve been opened to it.

We rapidly learn that this is not “just another day” as we watch Diana (Alice Ripley) unravel.

I found myself wondering what a young actor friend who suicided recently would make of this. No doubt, he’d roll his eyes at questions about the accuracy of this portray of mental illness. While it would be very easy to go hypercritical, that’s not what art is about. Next to Normal succeeds on so many levels, mostly because it goes for the heart, bypassing the ironic commentary.

Comparisons to Rent are inevitable as both are directed by Michael Greif.  With their insistence on the topical, both chart new territory, and invite the same type of criticism for doing so. Just as Rent mirrored our younger lives, providing the backdrop for a story about AIDS, Next to Normal mirrors our adult lives to tell a story about mental illness. Both succeed in opening the audience up to be a little more compassionate, both with themselves and others. While it remains unknown whether these shows will have the staying power of previous blockbusters, both represent a much-needed addition to standard Broadway fare.

There were no weak links in this cast, so it feels almost unfair to single anyone out for comment. Ripley’s full-throated voice is perfect for this demanding, slightly off-key score calculated to keep the audience on edge. Curt Hansen is entrancing whether he’s puttering in the higher levels of the scaffolding or on center stage. Anyone who knows the power wielded by an absent partner will be drawn into his performance of “I’m Alive.”

The only criticism here is with the sound mixing – an issue that dogged the show. Given that the band was so central, balancing vocals and music could have been cleaner. The sound is so overwhelming that these flaws get magnified.

This nit aside, Next to Normal will stay in your mind for days after – which is high praise for any production.