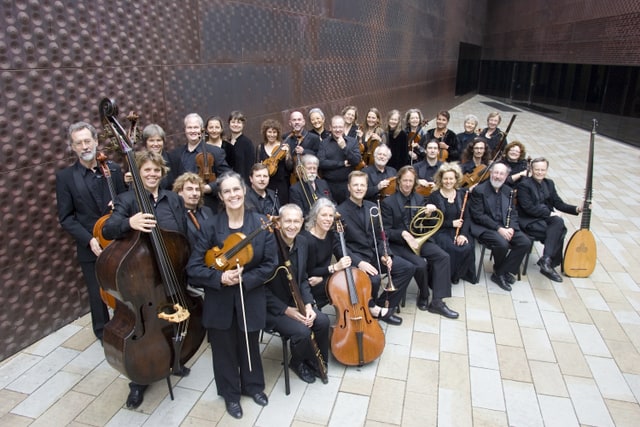 Building naturally on R.J. Kelley’s pre-concert talk about horns, Sunday’s concert opened with Telemann’s Concerto for Three Horns and Violin in D Major (TWV 54:D2). Derived from the hunting horn, the baroque horn has largely dropped from use.  With an irregular range of notes that can be played in different keys only by adding or removing the circular crooks, this instrument could be characterized as a total Uncle Louie device, as it requires the musician to drill “nodal dents”  – better understood as holes in the crooks – to produce a recognizable scale of sequential whole steps.  Such idiosyncracies aside, the baroque horn can be entirely majestic, not unlike its French horn cousin. 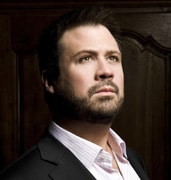 The use of horns alone would have made this piece an unusual selection. However, this concerto sounded strikingly unbaroque, even though Telemann is one of the most baroque composers. The fusty over-ornamentation and dense texture that drive some away from baroque music were entirely absent. Animated and friendly, the melody of the first moment  was thrown back and forth between horns and violin – and in a small way made some part of the universe right.  First violinist Carla Moore brought a achingly beautiful depth and clarity to the second grave movement – that once again, seemed particularly unbaroque. The concerto ends with a breathtakingly high-speed presto, executed with the PBO’s typical panache.

The star of the evening, countertenor David Daniels joined the PBO for Vivaldi’s Stabat Mater. Daniels’ powerful, intensely masculine timbre brought a depth and beauty to this best known of Vivaldi’s liturgical vocal music. Recognized as one of the most sought-after of his generation, Daniels originally trained as a tenor. One imagines that this training lies behind the power of his voice, which is modulated by exquisite softness.

As interest in baroque music explodes, so does interest in the countertenor role. A countertenor sings the alto – or even soprano  – voices of a piece  that were once off limits to women, thanks to Paul’s instruction to the Corinthians that “the women should keep silence in the churches” (1 Corinthians  14:34). While we’ll never know whether Paul could have possibly imagined that his instructions would lead to the castration of tens of thousands of boys throughout the 16th and 17th centuries, countertenors have handily filled this gap, especially after  the practice was outlawed in the 19th century. The NPR encyclopedia of classical music notes that countertenors are no longer a curiosity, but a legitimate modern voice type.

Returning to the stage after intermission, Daniels continued to stun the audience – this time with a display of the range of what his remarkable voice could do. While the gravitas  and solemnity that he brought to the Stabat Mater were at hand in a series of arias and recitativios from Handel’s Il trionfo del Tempo e del Disinginanno and Agrippina, Daniels’ coloratura introduced a new urgency to these pieces.  Most great concerts have a moment where the audience is so rapt that everyone knows that something very special is happening – and is aware that everyone around them is in on it as well.  That’s what happened during this piece.

Bookending Daniels’ breathtaking performance with more Telemann, the PBO went from the sublime to the just plain silly – and bought the audience along with them. With his characteristic twinkle, Nicholas McGegan introduced the Alster Overture. This program music depicts the life in the village of Alster, including everything from a string section that emulates the ribbetting of frogs to the great farting horns of the town band. Such silliness was the perfect end of a remarkable evening.