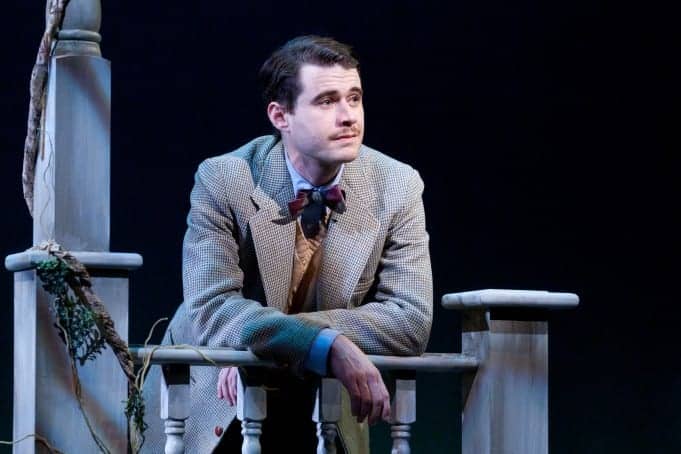 3.5 out of 5 stars - 'Sweet Stuff'
TheatreWorks, Lucie Stern Theatre (Palo Alto)
Directed by Robert Kelley
Based on the story by Truman Capote

The complete works of Truman Capote take up less than four inches in my bookcase. Aside from Unanswered Prayer, they get religiously reread every five years or so because Capote has the curious knack of being eminently forgettable and completely engrossing. A Christmas Memory takes up a mere fourteen pages, tucked in the end of a 1958 version of Breakfast at Tiffany‘s. It was almost if you were exhausted by Holly Golightly, who the cover jacket loudly proclaimed to be “the hottest kitten to hit the typewriter keys of Truman Capote” you might have time for Sook, many decades Holly’s senior, but equally arbitrary.

The rich poetry of A Christmas Memory sings from the stage. Any worries about the integration of text were set to rest at the outset as the first four paragraphs of the text burst forth as “Alabama Fruitcake” in the first five minutes. The integrity of this work required strict fealty to the text, which was brilliantly captured.

Such unabashedly sentimental productions always sit uneasily. We demand emotional resonance, but don’t want the sense of being emotionally manipulated. Throughout the first act, I was very conscious that every possible stop was being pulled out to ring an emotional bell, but that in itself isn’t a bad thing. Frankly, I was too busy falling in love with Buddy (Gabriel Hoffman), Sook (Penny Fuller) and Anna (Cathleen Riddley) to care. Our collective past is rediscovered in our idiosyncrasy, and director Robert Kelley milks it for everything its worth, with nary a maudlin moment.

The second act deviated from the text and was weaker for it. A throw-away sentence fragment (“Those who Know Best decide I belong in military school”) is leveraged to create a major plot point. The character of one of the nameless, character-less relatives peopling the background of the story is heightened for dramatic impact. A “Nellie Harper” was drafted into the story. While I completely understand why this was done, it felt like a mechanical exercise. This being said, Act Two had one of the strongest of very strong songs in the entire production with Buddy’s Midnight Adventure setting feet a-tapping.

Christmas, the season of giving, is as much about what is missing from our lives as it is about our extraordinary wealth.  In reminding us of this, A Christmas Memory is a true gift to the community.