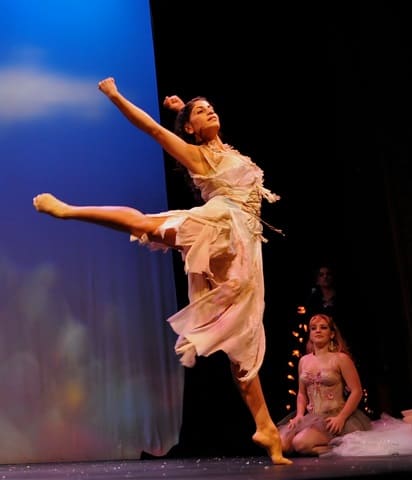 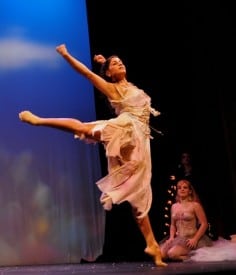 I confess, The Revolutionary Nutcracker Sweetie was the highest on my list of performances most likely to introduce novelty to the jaded original. Promising to use taiko, modern, tap, belly dancing, salsa, ballet bungee and hip hop, I was psyched to see what transformation the Dance Brigade could muster.

The audience of this dance school production was composed primarily (but not exclusively) of friends and family. Having drunk the kool aid on the importance of performing arts for kids, seeing student work always provides a window in what other organizations have to offer.

This Nutcracker certainly made the cut for most novel. The Claras (of which there are three) are undocumented workers in the employ of the McGreeds, who are preparing their annual holiday party, which is crashed by their wayward son, Drosselmeyer, a gay Mohawk-sporting traveler who gives one of the Claras a freedom fighter doll he got in South Africa. Dance Brigade prides itself on relating dance to issues of social justice. Here, that connection got lost entirely, as progressive political concerns were turned into an unfortunate cartoon. If this was done as comedy, the joke failed. 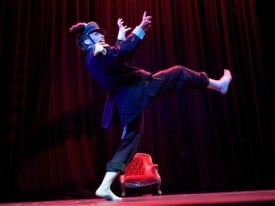 Fortunately, none of this dimmed the kids’ enthusiasm. With the exception of a few adult principals who played multiple roles, the kids were front and center throughout the entire production. I was impressed how very young kids worked so well with older ones in one scene after another. The strongest number in the entire production – the taiko drummers – included a wide age range. The competence and dedication of these kids was immediately apparent. The inclusion of teachers on stage in performances dominated by younger kids gave students an opportunity to perform that might not have been otherwise possible.

Curiously, it was the elements under adult control that failed the most. The stage curtain had been patched with duct tape, which screamed out to at least at this audience member. Having seen enough torn curtains in my time, it was obvious no one took the time – or cared enough – to patch it from the back. This created confusion when the adult narrator came on with a torn dress because it was unclear whether the dress was part of some political statement, a last minute accident or lack of concern.

My criticisms aside, it was great to see someone do something different with the Nutcracker – and this production, with its Navaho dancers, peace activists and angels of resistance certainly tried and should be applauded for making that effort. It will be interesting to see what the Dance Brigade does next.