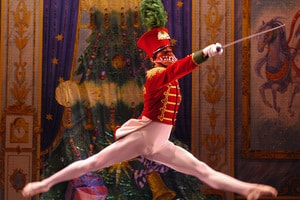 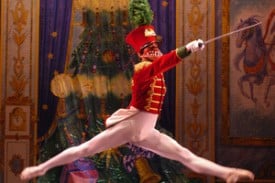 Moscow Ballet performed The Great Russian Nutcracker at the Flint Center yesterday. I had the good fortune to talk to Cristina Terentiev, who played Masha (aka Clara) before the event. In a somewhat fractured cell phone conversation, I noted how in the past, we revered Nijinsky, George Balanchine and Michail Baryshnikov, and held Russian dancers in enormous regard, and asked her if she thought the enormous esteem we have for Russian dancers continues.  Christina’s quick response – “but of course” was startling and I wondered whether she understood my question.

After seeing the Nutcracker, I understood why her response was so unequivocal because individual dancers were far more artistic than what I have seen so far. This was a relief because while contemporary productions try to top each other with flash, glitz, and athleticism, the quality of dance sadly suffers.  Even members of the Moscow Ballet’s corps had impeccably defined movement that was spellbinding to watch.

Unfortunately however, low production values, lighting snafus and a jarring lack of synchronization marred the overall ballet.  While attempting to compete with the SF’s Ballet’s flash and glitz would be foolhardy indeed, the painted drops proffered by the Moscow Ballet looked faded and old. The lack of an integrated lighting design meant that dancer’s shadows obscured the movement.  The falling snow at the end of Act One fell from only one side of the stage, a defect that made the production seem amateurish. Most annoying was the defective light that slowly turned on and off throughout the entire second act.  Christina suggested that I pay close attention during the exquisite pas de deux between Masha and the Prince, which was good advice because this was far more elegant and composed that anything seen so far. However, attention kept getting diverted as the darn light cycled on and off.  Lastly, in scene after scene, the dancers fell out of synchronous motion. These serious flaws detracted from the overall value of the production.

While it’s not possible to set these defects aside, various highlights of this most traditional of Nutcracker productions are worth noting.  The gentlemen dancers at the Staulbaum house were well cast.  With their long arms and legs, they brought an elegance and precision that has been lacking in other productions.  Also in the forefront was child Fritz, the smarmy boy who broke Masha’s nutcracker.  In other productions, Fritz was an eminently forgettable character, but in this version, he had far more stage time, and was far more evil. The Russian trepac dancers were – well, Russian – and completely fabulous.  The Arabian dancers performed movements that defied physics.  The traditional character of this production, with it’s Russian Father Christmas decked out in blue, was appreciated.  This was virtually the only Nutcracker that retained the original scene of Masha throwing a shoe at the Rat King.  That this production had so much going for it made its defects all the more painful.

Ballet aside, one tidbit did emerge from my interview with Cristina Terentiev. In the event that Clint makes tracks to Moscow, I just had to check who’s hot in Russian hockey. The answer came back quickly: Большая Красная Машина – translated as “Big Red Machine.”  Not having to contend with staged artifice and lighting issues, I bet the hockey’s even better.