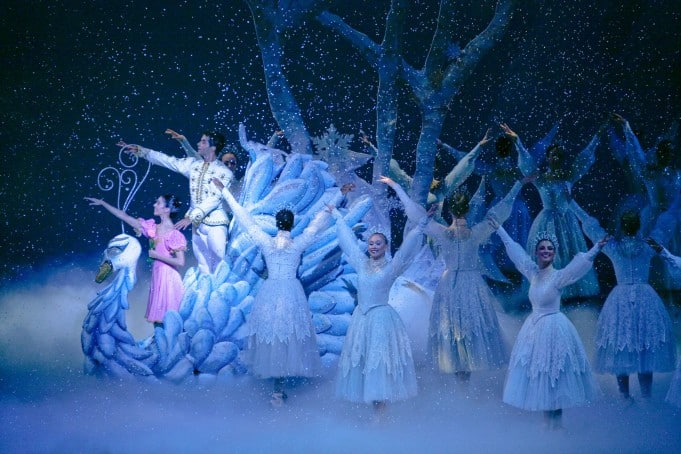 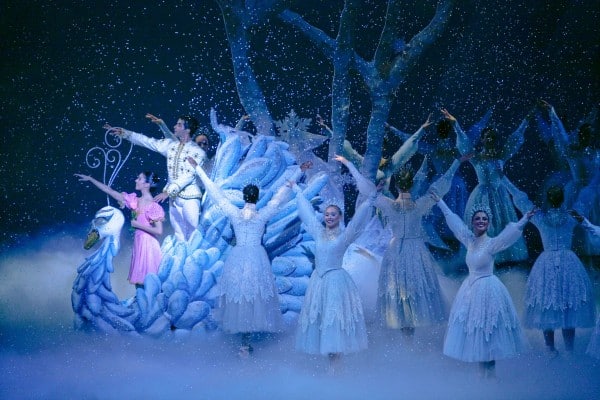 Ballet San Jose’s Nutcracker is an honest take on the classic story that relies more on the virtuosity of its performers than on flash-and-glitz.  That’s not to say that this production lacks the lush staging that we demand, opening as it does with the moiré wallpapered Victorian parlor of the Tannenbaum family. However, Dennis Nahat has been at this quite a while and he keeps getting better and better. If the Nutcracker itself has gotten old, Nahat keeps his audience on their toes, both by the artistry of his dancers and by the introduction of suspense and visual gags running throughout the entire story.

These gags begin early in the play, as Drosselmeyer “forgets” to deliver the Nutcracker into Clara’s hands.

After all the gifts are exchanged and the adults and children return to their festivities, the audience is left wondering where the Nutcracker is. While this undermines Drosselmeyer a bit, making him more of a space-case and less of an all-knowing magician, it effectively creates suspense where the audience least suspects.

The young dancers of the Ballet San Jose School playing the mice in the battle scenes demand special mention. While integrating children into the Nutcracker is a must-do,  it’s difficult balancing the desire to give as much face time as possible to these young performers with the need to maintain the integrity of the piece. This tension was clearly not an issue here as these kids played the cutest, most cunning mice in any production I’ve ever seen. With their small claws and well-articulated movements, they bring the fight scene to new heights.  Their reappearance as mourners accompanying the Rat King’s funeral procession brought the audience down.  My only quibble is that the mice weren’t brought back on at the end for a curtain call of their own.

With the Rat King killed off by a swift stab in the gullet by Clara (using the Nutcracker’s sword), the Prince escorts Clara through a fantastical dreamworld.  Novelty is introduced by including heads of state, including a Spanish king and queen, Chinese Emperor and Empress, Tsar and Tsarina and a morbidly obese pasha inhaling on a hookah in the Arabian Dancer scene.  In a stoned-out trance, he offers a toke to Clara and the Prince, who quickly look away.

Other running gags include the Prince’s comic failure to introduce Clara to the ends of state until nudged to do so.  I don’t want to overemphasize these bits, however, because they were mere gracenotes to the performance that was solid on the artistry of the dance.

Part of what kept this performance so vital is that the dancers rehearse for three or four roles and casting varies throughout the run.  Opening night, the Prince was played by Maykel Soloas, who was spellbinding.  Since for many families, the Nutcracker might be the one artistic performance they take in all year, it’s tempting to rely on athleticism rather than artistry.  Nahat wisely steers around this, and his productions are stronger because of it.

The Ballet San Jose Nutcracker runs through December 26. If you’re inclined to take in one ballet this season, this one is at the top of this list.