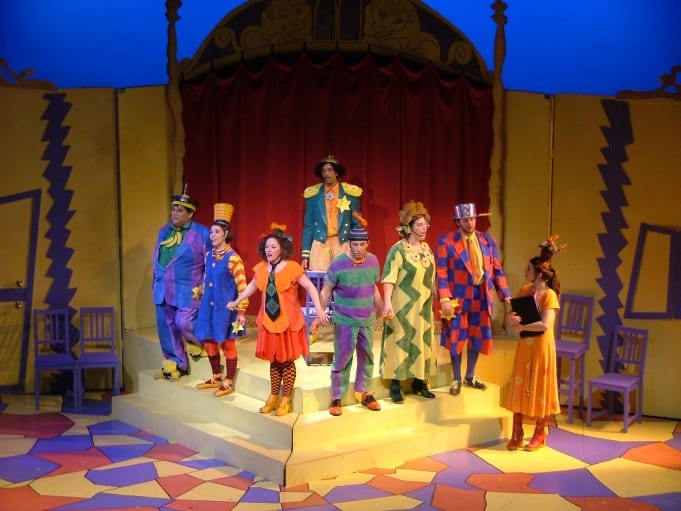 The MeshugaNutcracker: The Chanukah Musical!

In deference to memories of my orthodox bubbe and Anglican grandfather, our family runs in holiday mode from Columbus Day until New Year’s. There’s a few lines drawn of course. I’ll dance a hora to anyone’s menorah, but as long as you keep the tinsel off my hanukiah and don’t intimate that Chanukah is a Jewish Christmas, I’ll help you schlep your tree up the stairs. Mixing the two is a little too much like putting a dot of butter in the pan when you sear that porterhouse steak, if you catch my drift  – just not kosher. That’s what I brought to the MeshugaNutcracker: The Chanukah Musical: cynicism about who’s co-opting who. 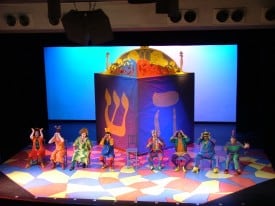 Sometimes you just have to get over yourself. After all, doesn’t “Tchaikovsky” sound at least a little bit Jewish?  The whole idea of the Nutcracker story was meshuganah…

Dashing into the Retrodome last night, I braced myself for the smell of stale buttered popcorn, only to find notes of – could it be?  Latkes? Sufganiot? There was even a smiling face saying to feel free to bring them into the auditorium.

Once inside, I was startled to find the background music virtually identical to what had been playing in my car: “s’vi-von, sov sov sov. Chanukah hu chag tov…” Eight blue chairs with a taller shamash chair in the middle… this was looking better and better. Fumbling with the program, I noted that it opened from right to left.  Somebody had an eye out for all the details. Bubbe would be right at home.

The MeshugaNutcracker: The Chanukah Musical is exactly that: meshuganah. Within two minutes, smiles on the audience started getting broader and broader. Set in the mythical city of Chelm, a cast of eight riffed their way through the laugh-aloud funny Chelm tales my son loved as a child, stories of Chanukahs past, Chanukah miracles and the power of light – all sung to the Tchaikovsky score. 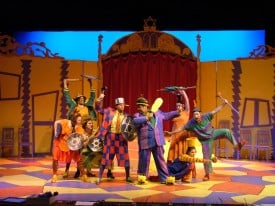 Interspersed between it all was one bad Broadway pun after another:  My Fair Zaide, Andrew Weiner’s The Shabbos Express, Seven Maideles for Seven Boychiks, To be or Maccabee…To steal one of their puns, it was a challah of a good time.  There was even a yellow rubber chicken. Visual gags abounded, with flag-waving and plunger bearing solders lifted from Urinetown and indirectly from Les Mis.

Chatting with producer Scott Guggenheim during intermission, I learned The MeshugaNutcracker had been around the Bay Area since 2003 and had even toured nationally. If you have any inclination to check out ChopSchicks on Christmas, check out The MeshugaNutcracker now. I know I’m going back to see this one. Besides, even if Tchaikovksy wasn’t Jewish, smart money says his librettist was…