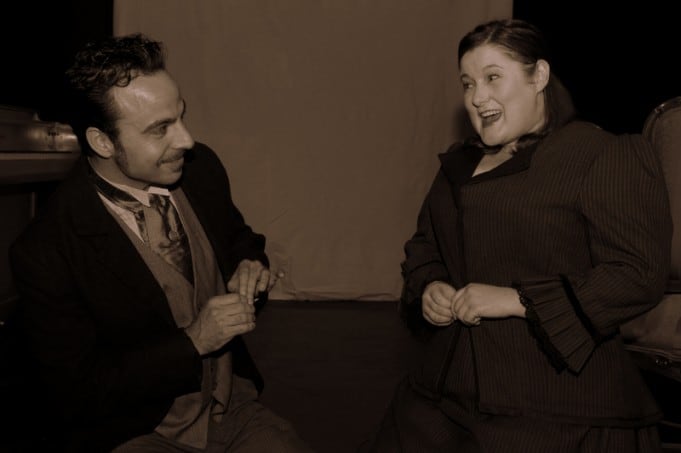 Turn of the Screw

Halloween hasn’t ended yet at the Dragon, where they close their tenth anniversary with Turn of the Screw. As ghost stories go, TOTS has far more in common with Hitchcock than generic shrieker stories, which makes it worth taking in on an autumn evening.

The intentionally spare set, lack of props, and multiple roles played by single actors leave little but the quality of acting and script to carry the show. This is acting at its purest. George Psarras effortlessly jumped genders, ages and social classes as he moved from being the ten-year old Miles, to the middle-age housekeeper Mrs. Grose, to the well-situated Uncle whose actions unleashed the drama. Just as a cartoonist captures a character in a few lines, Psarras’ down cast eyes nailed the person of Miles, and his rounded shoulders animated the person of Mrs. Grose. However, Psarras’ creations were anything but cartoons, as they brought a depth of character to this psychological thriller. 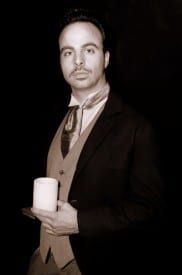 Cast as the governess, Katie Anderson’s performance emphasized the ambiguity of the story as it remained unclear whether the ghosts existed only in her mind or whether they truly did inhabit Bly, the manor house where she found herself. Ms. Anderson seems to be on a run of playing madwomen recently, have just appeared in Angels in America (Part One) were she played the nutty-as-a-fruitcake Harper, whose craziness freed her to be one of the truth tellers in the story. Here, she vacillates between the responsible governess-at-the-helm and someone whose reliability is suspect at best, given her cloying insecurities and romantic fantasies about her employer. Anderson’s vacillation enriches the drama enormously because the various shades of her character leave the story open to multiple interpretations.

Given the lack of set and props, costuming took on additional importance. Costume designer Pat Tyler’s designs for both Psarras and Anderson were impeccable. I found myself riveted by Anderson’s grey skirt and jacket.

My only reservations with this production originate more with the book than in this production. Having treated myself to a re-read of the book before seeing the play, elements of the story continue to remain inexplicable, including why Mrs. Grose took Flora away from Bly and just how Miles ended up dead.

However, these nits don’t detract from the play itself – and indeed, they seem more tolerable in the play. Likewise, dialogue between the governess and her employer brought a comic timing altogether missing from the book.

Much like Dickens’ novels, Turn of the Screw first appeared as a 12 installment serial in 1898. One hundred and twelve years later it continues to inspire and take on a new life of it’s own.