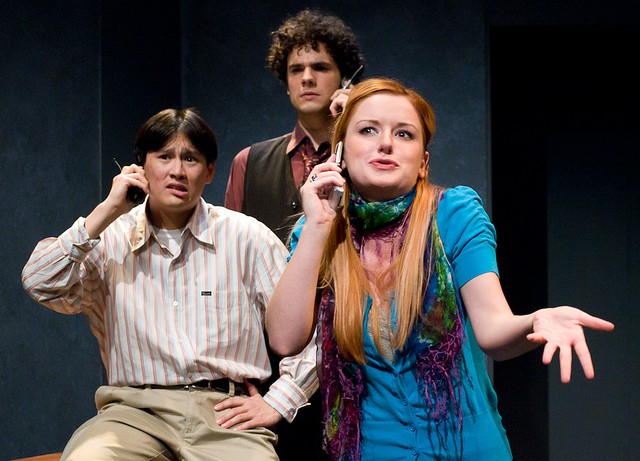 One of the things I like about getting older is the intense pleasure that goes with being occasionally wrong. Perhaps it speaks to my own cynicism, but finding out that something or someone shouldn’t be as quickly dismissed as I often do brings it’s own kind of redemption.

This is exactly how I felt about CTRL + ALT + DELETE.

The idea of a drama about the tech boom brought nothing but a sigh of ennui. Been there, done that, don’t want the moralizing about vaporware.* Insofar as the economic doldrums we find ourselves in do wonders for the traffic, we may be better off. I haven’t felt like I’m personally standing between someone and their next million as I poke along the highway in a long time. Yeah, it was exciting, but do we really want to go back there? Do a play about this stuff? Yawn.

Boy, was I ever wrong… CTRL + ALT + DELETE is fast-paced, brilliantly cast and laugh aloud funny. I came in expecting to be bored and left feeling truly energized.

The characters were just so impeccably drawn that they were instantly recognizable without being cartoon stand-ins. We know these people. Part of the reason they seemed so true to type became evident in the talkbacks after the show as one actor after another ‘fessed up to their character being largely drawn from themselves. This authenticity is immediately palpable in their performance, particularly with the characters Carbury Grendall (Adam Minton), Eddie Visker (Kevin Hsieh), Marie (Lisa O’Hara) and the baby-faced Tom Xerox (Adam McGill). Only Gus Belmont, played by Ray Renati seemed slightly off – but then perhaps that’s just what goes with playing a character with a messiah complex.

Director Vickie Rozell’s deft hand in having some characters exit while others enter creates an effective illusion of momentum which is hard to pull off in a performance space this small. Pacing is quick as the action flies forward.

Afterwards, I puzzled as to how a play about tech that had to define its space in time as being before the iPhone and GPS didn’t feel dated. Here, the characters are so likable and the pace so fast, that CTRL + ALT + DELETE remains fresh. However, I doubt that would be the case with a lesser production. The likability of the cast – and the playwriter’s decision to give them all a second life beyond the drama, subtly shifts the focus away from moralizing about the charismatic leader Gus Belmont or their dilemma in selling a product that didn’t exist. We’re more attracted to watching these guys interact than the topic of their interaction. There was just so much that was right about this production.

CTRL + ALT + DELETE runs through November 21st. It’s worth taking in, even if you have no interest in drama about the tech boom. There was just so much right about this production that it trumps the subject matter.

*Vaporware: in intellectual property-speak, this covers inventions that haven’t been “reduced to practice.” Translation: there’s no real product.