A sparkling wine for a sparkling team. While we’re not sure any of it was actually consumed, the San Francisco Giants celebrated their World Series win over Texas by spraying, shaking, tossing, and — yes — even chugging Mumm Napa Brut Prestige ($20). It was the same wine used to celebrate the National League Championship, Division Series win and division clinching victory over the San Diego Padres. 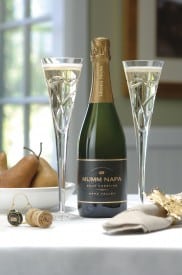 Once again, Napa is a favorite choice for those in the lime light or when the celebration is some 56 years in the making. Duckhorn Vineyards has achieved similar success and National recognition for routinely supplying red wines to the White House. Duckhorn, Korbel were served at the official Obama inaugural lunch.

Ironhorse Vineyards some might suggest was instrumental in helping end the cold war (How I ended the Cold War with Iron Horse Russian Cuvée)… well, at least the smooth bubbly put Reagan and Gorbachev in the right frame of mind, no?

A story that probably does not bear repeating, nevertheless: The San Francisco Giants won the World Series 4 games to 1 over the Texas Rangers, marking the first championship for the Giants since 1954 and the first for the city of San Francisco.

Mumm Napa VP of winemaking operations Rob McNeill worked with a contact at the Giants to supply Brut Prestige for each of their victory celebrations.