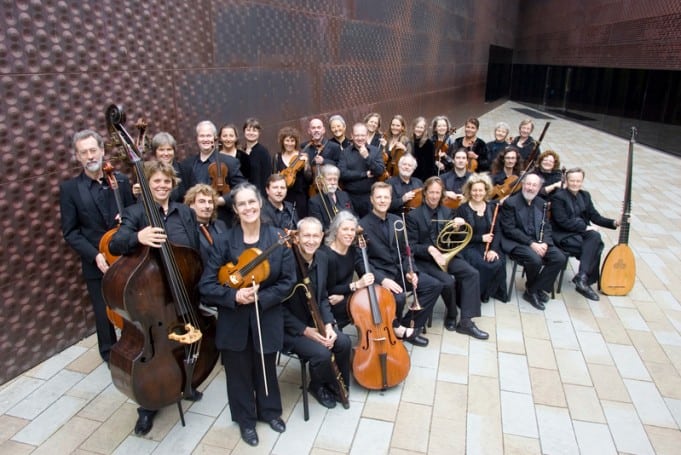 Caught between between one work which I’ve heard too often (Le Quattro Stagioni aka The Four Seasons) and another with which I was totally unfamiliar (Zavateri who?), I almost didn’t make it to last night’s performance by the Philharmonia Baroque Orchestra. Fortunately, this concert got on my agenda, because just as the old is made new, Nicholas McGegan brought both a fresh face to the Vivaldi and new listeners to Zavateri at the Menlo Atherton Performing Arts Center (MAPAC).

The Menlo Atherton Performing Arts Center is a new venue for the PBO, who used to perform at First Methodist in Palo Alto. The product of multiple bond measures and special funding from the city of Menlo Park, this venue is rumored to be acoustically perfect. While I won’t profess to have the sort of ear for such distinctions, nothing I heard contradicted such claims. We’re profoundly lucky to have this venue in our community – and even luckier to have the PBO at our doorstep.

Scott Fogelsong’s opening lecture could have been retitled “A Comparative Analysis of Coo-Coos from the Baroque to the Present.” Beginning with what he claimed to be coo coo sounds in the Four Seasons, he traced the insistent violin riff through multiple composers before arriving at “20th century coo-coos.” Fogelson’s delight in this bit of silliness proved infectious and his coo-coo analysis served as ear-training for what was to follow. 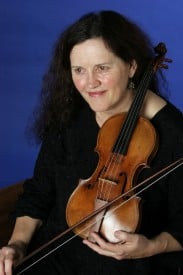 McGegan raised his baton to open with the Neapolitan Arcangelo Corelli’s Concerto Grosso Op. No. 11 in B-flat Major. McGegan’s treatment of this piece left enough space open for the listener to appreciate the complexity of what Corelli was doing. This light airy Italian style set the tone for the balance of the evening. Instead of being overwhelmed by the thick texture of the music, one could delight in various different threads. Having been listening to German baroque ever since the PBO’s most recent all-Bach concert in San Francisco, the difference was quite stunning.

Perogolesi’s Sinfonia in F Major followed. 2010 is the 300th anniversary of Perogolesi’s birth so he’s been getting quite a bit of well-deserved attention around the world as baroque orchestras from Seattle to Jesi, Italy have performed him this year. The Sinfonia in F Major was a short, friendly, three-movement affair that surprisingly opens in F minor. Far from what we would recognize as a classical symphony, the piece was not entirely baroque either.

Vivaldi’s Four Seasons followed, interrupted in the middle by an intermission. Joined by violinist Elizabeth Blumenstock, the PBO performed a work that was almost entirely new to my ears. As stunning as Blumenstock was, so much came together here, that the entire orchestra shone. Blumenstock was healing from an injury and the audience was warned that a season might be dropped, but fortunately such was not the case. There were things in this work – a whole pizzicato section – I simply had never heard before. Most intense were the exquisitely delicate, hushed, pianissimo portions during which the orchestra held the entire audience in the palm of their collective hands only to overwhelm them with a return to the multiple, lush rivulets of notes. All of Fogelsong’s coo-coos were nestled in this piece – which I confess I’ve been appreciating anew through new iTunes acquisitions, although not as good as the PBO version.

The Four Seasons was followed by Zavateri’s Op. 1, No. 10. This pastorale was an excellent choice to follow the brilliantly, intense finale of the Vivaldi work that preceded it. If ever a musical step-down transformer was needed, this was the moment. I do hope the PBO records this because there is exactly one version of it on iTunes, performed by the Hutchins Consort. Every now and then my ears caught a bit that seemed to be a direct knockoff of parts of the Four Seasons. The concert ended with a short piece by Durante (Pergolesi’s teacher), which McGegan characterized as the Charlie Chaplin of the baroque. His assessment was on the mark as the exaggerated riffs throughout this piece brought a perfect end to the night.

Worthy of note was the presence of the theorbo onstage. A cross between a over-sized lute and a harp, the theorbo has strings that are fretted (like a lute) and others that are strummed (like a harp). I’m grateful theorbo player David Tayler remained on stage during much intermission answering questions about his instrument that was made after an instrument originally made in Venice in 1610.

The Philharmonia Baroque Orchestra will be returning to us in December, bringing yet another over-performed work – The Messiah. I cannot wait to see how they transform that one.