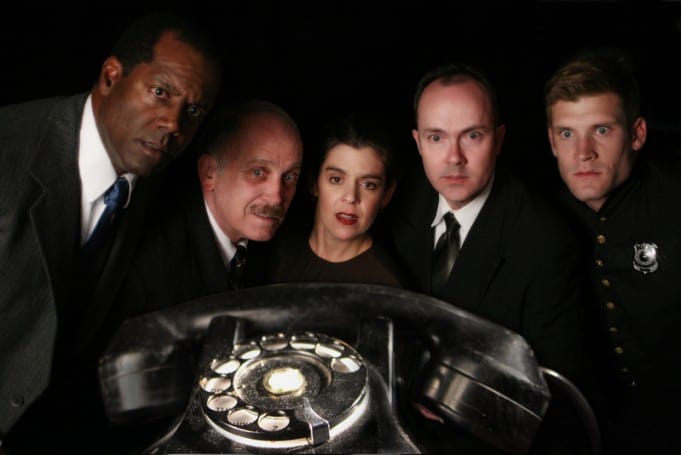 3 out of 5 stars - 'Worth a Look'
Hillbarn Theatre
Directed by Gary Gerber
Foster City, CA
October 21 through November 7
Review by Cy Ashley Webb

One of my worries is that kids today aren’t getting enough Hitchcock. It’s bad enough that many of our over-educated offspring have better things to do than come home from school and watch Marx brothers movies – and yes, I understand that young men today might have better bona fides than doing a good Groucho – but my worry about Hitchcock persists. I worry there’s a generation of kids whose hearts don’t skip a beat when the master comes on the telly – and I worry that we’ve become such a violent society that Alfred Hitchcock and his oeuvre have become passé. After all, what murder mysteries could hold a candle to a generation jaded on finding Osama bin Laden?

I indulge in this rant because this worry is nested next to a second set of worries: whether theatre could possibly follow the lugubrious AH himself. While I’ve seen a handful of productions of “Dial M for Murder,” AH sits on my shoulder, the ultimate critic. My imaginary AH is never happy. Productions are never in black and white and they’re never as smart or as dour as the master himself. That being said, one has to appreciate that works of art take on a life of their own. William Shakespeare might take exception to the Wingspread Company’s version of MacBeth, but that doesn’t mean I didn’t sit through it five times, so enraptured I didn’t even try to deconstruct it’s magic. 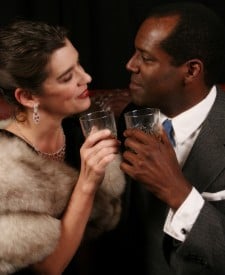 All this is a long, slow wind-up for the Hillbarn’s production of Dial M for Murder that opened last night. If the devil of a perfect crime is in the details, the cast and production staff left no matter unattended. One could not help but be drawn into the rich set – all the more astounding to those familiar with the offbeat shape of this idiosyncratically-shaped performance space. As soon as Kelly Rinehart (Margot Wendice) walked on stage in her dangling earrings and diamond necklace, one could not help but appreciate the enormous work that went into this production. Just as the Hitchcock drama turns on details – the key, the phone, the stocking – the Hillbarn production offers us a window into that world.

Acting in accent is a particular challenge. Kelly Rinehart (Margo Wendice) and Frederick Goris (Tony Wendice) did a workman like job, but their efforts nagged my ear as I wondered about the words that seemed to be held in tongs. The implications of class and accent are foreign to us and these accents seemed to throw the audience askew. This wasn’t necessarily a bad thing because it gave far more credibility to Fred Pitts playing the American Max Halliday.

If the accents created a touch of uneasiness, this disquieting feeling vanished once the capable Steve Schwartz entered the scene as Chief Inspector Hubbard. Together, Fred Pitts and Steve Schwartz maintained the tension necessary to the unlocking of the crime. All attention was on Schwartz as he played his cards close to the chest, never letting the audience know precisely how much he knew. Schwartz straddles the distance between being an uncanny investigator and a bumbling bureaucrat to perfection.

This is the 70th anniversary year of the Hillbarn Theatre. Few theatres on the Peninsula (Palo Alto Players and Palo Alto Children’s Theatre being exceptions) can make that claim. One doesn’t survive that long in a competitive theatre environment without doing something right. Let us hope that both they and the master continue to thrive.