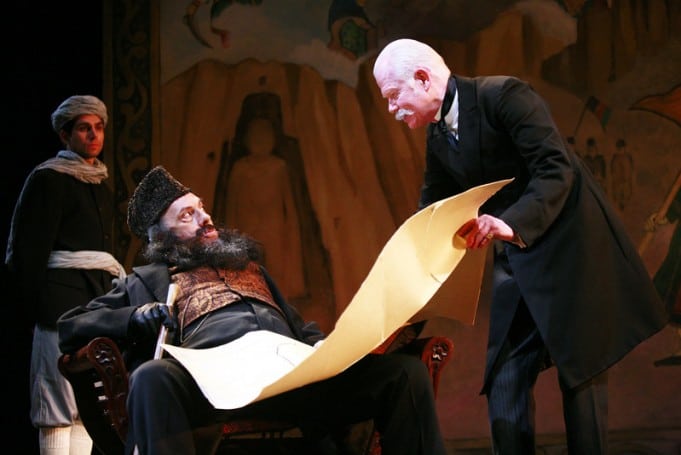 The Great Game: Afghanistan is an astonishing achievement. An epic collection of short scripts, the production is now playing at Berkeley Rep in three parts, weaving together a multi-layered history (1842-present day) of an embattled country from multiple perspectives. Bringing to the stage such a broad array of voices, vivid scenery and patient dialog is a testament to Nicholas Kent and the team that commissioned the plays back in 2008. As he writes in an introductory note, “It was becoming clear that Afghanistan was going to be the main focus of British, European and American policy for at least the next decade.”

Essential material no doubt. But I admit to being more than a little concerned: could I sit through over seven hours of theater focused on Afghanistan?

In Bugles at the Gates of Jalalabad, one of the opening pieces, I immediately sensed that this intelligent production was worthy of its accolades. I was quickly engrossed as some Brits on the watch deal with fog of war and conflicted thoughts.

This is definitely not CNN (not that there’s anything wrong with that). Mind you, the struggle, the heartbreak, the violence, the drugs, the terrorism are all here, but what separates the material from pop culture headline fare is its attention to the humanity — the proud people that call Afghanistan home.

“If you want peace in your country, you should first have peace with your neighbor.”

Although we bear witness to plenty of American and British vignettes, it’s the ones involving the Afghan people that challenge and leave us quite moved at times. Yes, they are, more often just like you and I. In Part Two of the plays (Communism, the Mejuahideen, and the Taliban), during an imaginary conversation between a writer and former Afghan president Mohammad Najibullah (“Miniskirts of Kabul”) we learn that even he likes the Spice Girls. Amidst the backdrop of exploding bombs and thundering fighter planes, it’s surreal imagery. I’m not sure it’s true or not, and it’s not really important. What matters is that we’re taken into a very personal and often fascinating look at Afghan culture, ideology, and — despite improbable despair — their eternal hope for prosperity and peace. And the dramatic juxtaposition of Western influence against nomadic reality.

With twelve writers on board, there is something here for everyone. Like a series of short films, if something’s not to your liking you’ll soon enough be whisked to the next scene — moving, for example, from a Kabul guest house (“Durand’s Line”) to a scene later involving the breakdown of a Rolls Royce carrying the King of Afghanistan, his daughter and an ex-foreign minister (“Now is the Time”).

Everyone will have their favorites. Between the three parts (which I watched in a special “marathon” presentation that started at 11:30am and ended about 10:00pm that evening) you could hear tremendous buzz as the audience chatted about politics, Afghanistan, and their favorite moments seen just moments earlier on the Rhoda Stage in Berkeley.

Perhaps the best part of The Great Game: Afghanistan is the acting. Once again, true to Berkeley Rep standards, it’s out-standing. The cast of 14 should be commended for performing at such an impeccable level across three plays, seven hours of stage presentation, and almost twelve hours total including intermissions and breaks. Marathon, no?

It’s hard to pick acting favorites since so many of the cast were agreeable. But I’d say a few in particular left searing impressions in multiple roles, all utterly convincing and imminently watchable. Michael Cochrane, for instance, is just simply brilliant in several shorts; his cadence, poetic delivery and body language are first rate. Likewise, Daniel Betts, early on as a British Commander McCann (“Bugles at the Gates of Jalalabad”), and then later as another commander wandering somewhere across Poppy fields (“Black Tulips”). Equally impressive, Tom McKay, as a British Foreign Officer (“Campaign”) and then later as a war-torn Sergeant losing touch with family in the dramatic closing piece (“Canopy of Stars”). I could go on, but suffice to stay, the acting is highly enjoyable.

“Are we in our ninth year in Afghanistan, or are we in our first year for the ninth time?”

Not everything is perfect, as you might expect from seven hours of theater. There are some lulls in part two that test patience; some plays, perhaps in an effort to be overly paced, are tedious — merely slices of time, we’re left neither moved, informed, or challenged. Instead, during some of these I was looking forward to the next short.

My favorite short of the lot was the one written by Ron Hutchinson called “Durand’s Line,” featuring the aforementioned Michael Cochrane and an equally brilliant Raad Rawi, debating lines on maps. The scene has a Lawrence of Arabia-like aesthetic that is truly marvelous. The two, seasoned military leaders — one Brit, the other Afghan — respect each other despite their obvious differences concerning the value of a map, “Does a map describe the world, or bring it to be?”

I’m not an astute student of political affairs. I can only imagine what someone like Christopher Hitchens might have to write about such things across the vaunted pages of Vanity Fair. However, I do know that this production pulls off an amazing feat. It entertains and informs. It’s a double whammy that should not be missed by fans of theater nor fans of politics. Sorry to say, no Anderson Cooper on this stage. Consider it cable-free therapy. It’s a story that teaches us that what we cherish in life is often more similar to those even half-way across the planet. After all, we are all human beings.

Part One: Invasions and Independence
4.5 out of 5 stars

Part Two: Communism, the Mujahideen, and the Taliban
3.5 out of 5 stars