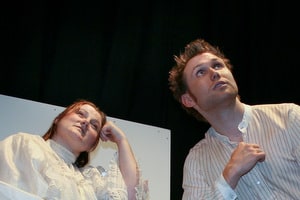 3 out of 5 stars - 'Worth a Look'
The Pear Avenue Theatre
Directed by Diana Tasca
Mountain View, CA
Through October 17th, 2010
Review by Cy Ashley Webb

Our Town is so enmeshed with our cultural sensibilities that I suspect it gets absorbed into the bones of those who are unaware of its existence, in much the same way as the water and the air. As the Pear Avenue Theatre’s current season is devoted to Americana, Our Town was the appropriate place to start. Written before World War II, it harkens to a simpler America. While we wince at the parochialism of Grover’s Corner, we ache at characters that are taken so seriously and are so lovingly drawn.

This production of Our Town invites the inevitable comparisons to past productions, such as relatively recent one by the Palo Alto Players, especially as some of the cast were in both productions. More immediately, it invites comparisons to Angels in America (Part One), with which it is simultaneously running.

The same measured performance that Detroit Dunwood gave as Belize is at work in his performance as the Stage Manager in Our Town. Granted, there’s galaxies between the drag queen Belize and the Stage Manager, but both are informed by a slow, measured quality that gives both characters an unquestionable personal authority. 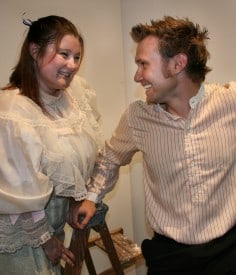 If Mr. Dunwood is all about restraint, Katie Anderson is at the other end of the spectrum. The distance between the Harper Pitt can speak truth in the guise of being a nut job, and the young Emily, who is totally responsive to the world around her, vanish entirely because both characters bring an emotional freshness and authenticity that is powerfully touching.

Tom Ammon may have had the most difficult job last night because his commanding performance as Roy Cohn in the previous night’s production immediately invites comparison. However, watching him on stage, I forgot he ever was that person – which is a big leap indeed.

Leaving the theatre last night, it hit me again just how much good theatre is about caring. For however brief a period of time, while onstage, these characters matter very deeply to the audience and to each other. It’s that type of energy that gets conveyed in both Our Town and Angels – and is why they both succeed on so many levels.