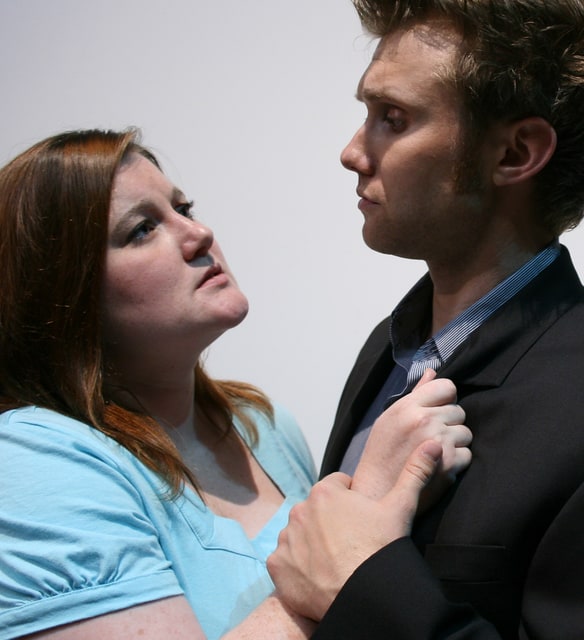 I approached last night’s opening of Angels in America Part One at the Pear warily as expectations would be almost unbearably high. Commissioned in 1991, Angels won a Pulitzer and a Tony in 1993 and was heralded by academics – including Harold Bloom who claimed it to be part of the western canon. If that weren’t enough baggage, most audience goers have at least a passing familiarity with the 2003 HBO miniseries adaptation. However, the first five minutes of this gem of a production showed my fears to be misplaced.

There were no weak links in this tiny cast. Lance Fuller (just recently in Jewtopia, also reviewed in StarkInsider) was brilliant as Prior Walter. Detroit Dunwood’s measured performance of Belize avoided some of the excesses of other versions I’ve seen and was stronger because of it. Pat Tyler’s flexibility enabled to her to make the transition from the elder rabbi to the severe Hannah Pitt so seamlessly that I had to check my program to see who played the rabbi. Katie Anderson gives us a Harper Pitt that we care enormously for, even (or maybe especially) in the reaches of Antarctica. These are strong characters you will want to take home – even Tom Ammon’s Roy Cohn.

In 2010, any production of Angels begs the question as to whether this play will hold up or whether the political references will date it. It’s easy to envision an audience insensible to Roy Cohn’s indirect references to Nancy Reagan. Even references to Kaposi’s sarcoma already cause our 2010 brains to spend an extra second processing. However, I’m not sure these instances matter. The script remains vital, muscular, and caustically funny.. As long as there is a cast a strong as this one, Angels will remain on the circuit.

Angels is running simultaneously with Our Town, with cast and crew doing double duty for both.  Flanking either side of the 20th century, these distinctly American plays can’t really be separated from the shell from which they came. As the program notes remind us, both works have unconventionally minimalist sets, short scenes, split staging and doubled roles. Both involve voices from the great beyond. The entwinement cuts even deeper, as many in the audience remember Tom Ammon as the Stage Manager in the Palo Alto Players’ version of Our Town from several years ago.

I confess, as soon as I got home I started scrounging the ‘net, looking for a download of Part 2, Perestroika. Despite the  length of last night’s performance, I wanted to spend more time with these people.

Angels in America, Part 1
By Tony Kushner
The Pear Avenue Theatre
3.5 out of 5 stars
Directed by Jeanie K. Smith
Through October 16th