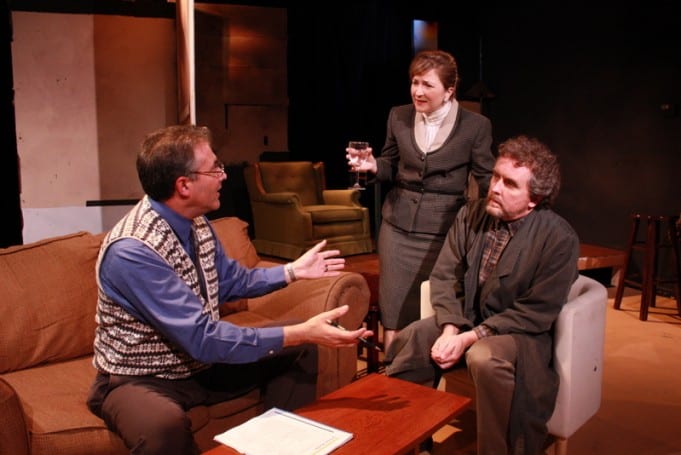 Much thought goes into selection of works produced at the Dragon. Meredith Hagedorn has an unerring eye for what works well in this tiny performance space, coupled with a good instinct for what will provoke an audience without being tediously academic. You don’t go to the Dragon to see Rent, Chicago or other big name musicals. You don’t go to the Dragon to be bored out of your brain with another production of Godot. You do go to be engaged and have your world expand out a bit by meeting new characters and having these people in your life. This is the magic of the Dragon – and by and large serves their audiences well.

Given the freshness and provocativeness of what happens at the Dragon, I was not surprised that I had to look up John Kolvenbach in Wikipedia before going to Love Song. The fact that Kovenbach wasn’t on my radar is lamentable, but hardly surprising because my ignorance was shared by director Dave Sikula. Kolvenbach should be on everyone’s radar because he’s clearly a rising star worth following. At present, he seems best known for Love Song (nominated for an Olivier in 2007), Gizmo, On an Average Day, Goldfish, and Fabuloso. If Love Song provides any indication of what this writer’s about, I’m eager to see his other work. 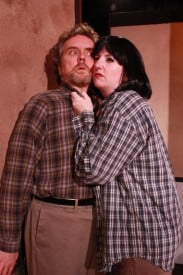 Love Song is about 36 different kinds of crazy, all contained in a four member cast.

This is not high-drama crazy that’s exhausting to watch because Sikula’s pacing prevents that from happening. Rather, it’s the type of crazy where you see something you know, but you watch it get stretched further than it should be, before thankfully, the drama moves on to something else. The main focus — identifying the line between sanity and not — is an old theatrical conceit, but Kovenbach makes it new with characters who are congenitally unable to call in sick to work, let alone process anything as complicated as overseeing a summer intern manage a stapling job.

The tiny stage of the Dragon divides cleanly into an upstage living room, that’s home to Harry and Joan, a modestly successful, albeit understated OCD pair, and a downstage remote one-bedroom apartment elsewhere in the city, that’s home to Joan’s mentally ill brother, Beane. Life gets thrown out of the balance when Beane meets Molly, who may not exist at all, but who nonetheless has a salutary effect on Beane’s life.

Director Dave Sikula is compassionate with these characters. While I can’t imagine anyone wanting to go for a beer afterwards with either Harry or Joan, Sikula takes them seriously enough to make them, if not likable, at at least redeemable. Thus, Joan’s inability to call in sick with any credibility is funny rather than pathetic. Moreover, ultimately, her willingness to suspend reality and entertain the notion of Molly is an act of profound love.

Love Song will be at the Dragon until October 3 – and is well worth checking out.