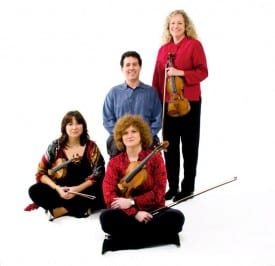 String quartets are great to drive to, great to clean the house to, great to groom the dog to. There’ve even better deliciously wafting up to the second floor of the Isabelle Stuart Gardner Museum in Boston when you’re wandering around looking at artwork. However, most are not the best to actually sit down and listen to.

The Ives Quartet is different. In a world of many darn good string quartets, there aren’t many that play with their passion and intensity. Composed of two violins (Bettina Mussumeli and Susan Freier), a viola (Jodi Levitz) and a cello (Stephen Harrison), the Ives Quartet puts this music back on the map. This is not your mother’s string quartet playing lovely, lyrical, forgettable period music. This music engages the brain and soul and leaves you in a very different place than when you walked in the room.

One of thing things I really appreciated was the effort that individual members made to actually explain the music before they played it. The group opened with Haydn’s String Quartet in B-flat Major, No. 1. This marks the beginning of a venture in which the group will play all of the works in this series. Jodi Levitz’s remarks about this being a “very Haydn” piece and her anecdotal material about Haydn publishing this with three different publishers warmed the audience to a lovely, lovely piece. This was immediately followed by Dane Rudhyar’s String Quartet No. 2, Crisis and Overcoming.

The Rudhyar piece was an ambitious undertaking. I’d read a fair amount of Rudhyar – and was painfully familiar with his dense, overwrought style that forced the reader to go through 20 pages before coming to yet another Rudhyar gem of insight. I was stunned to learn he was a musician – and even more stunned to learn he’d lived in Palo Alto. I’m grateful to the Ives Quartet for taking on this work. Before picking up his bow, Stephen Harrison let the audience know that while one of Rudhyar’s aims was to avoid the very intellectual approach of Schoenberg, this piece sounded very much like Schoenberg. Harrison’s analysis was spot on. Indeed, I found this piece, not unlike much of Rudhyar’s writing – aimless wandering, except for the bits that make you sit up. Like much of Rudhyar’s writing, I wish this piece could have been condensed to something substantially shorter. This is not a criticism of the Ives quartet or their choice of this music. I came away there knowing more about Rudhyar than I did coming in – and have a whole new appreciation for his influence on John Cage and Lou Harrison. This alone would have been worth the price of admission.

If the first half of the concert fed one’s mind, the second half went straight to the spirit. Pianist Gwendolyn Mok joined the group for Robert Schumann’s Piano Quintet in E-flat Major, Op. 44. Whereas the first Haydn piece left no doubt as to the virtuosity of this group, this piece left no doubt as to their intensity. Playing in equal measure, neither the group nor Ms. Mok dominated the work. Engaging the audience, this piece held the audience’s attention in a rare laser-like focus. Leaving Le Petit Trianon, all I could think of was the name of one of the groups’ concerts in a previous year – “plays well together.” Indeed, they do.

The Ives Quartet will be returning in November for a fall salon, and again in February at locations in Palo Alto and San Jose. They are worth checking out – especially if you want your mind changed about how dynamic string quartets can be.