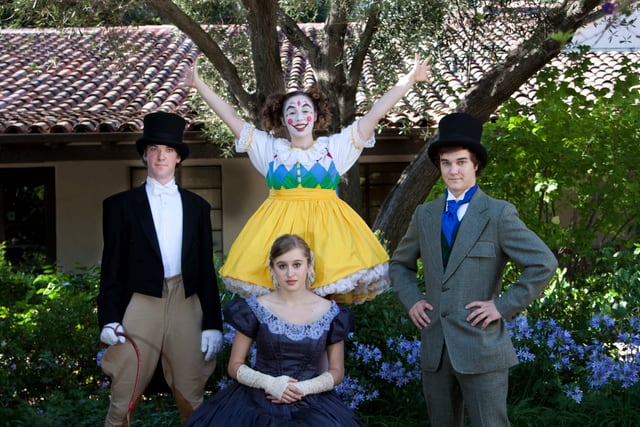 Some of us remember when former director Michael Litfin would remind kids to “leave the magic in the theatre.” This uncharacteristically mild admonition to remove one’s makeup may no longer echo through the rehearsal hall, but the magic continues stronger than ever at Palo Alto Children’s Theatre, with magic man director Judge Luckey at the helm. After all, where else but Palo Alto Children’s Theatre can a family of four do dinner and a show for fifty bucks while continuing a 78-year tradition of theater for kids by kids?

This production of Barnum is the perfect show to introduce a child to the magic of theatre. I confess, at various points, I was as struck watching kids in the audience mesmerized by the fabulous entre’act clown bits as I was by the show itself. In very pure sense, this is the magic that happens when theatre is a community event. We all grow up in the process – and hopefully get a window in what it means to be wiser, funnier and more compassionate. 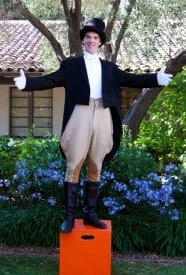 Such philosophizing takes me far from the show that opened tonight – and which will be running for the next two weeks. Barnum is the tale of classic American prince of humbugs, Phineas Barnum (Tristan Jennings-White). Central to the action is the tension between Barnum and his long-suffering wife, Chairy (Blake Soderstrom). Soderstrom’s capable vocals add much to this production.

Balancing this drama between Barnum and his wife is the ever-unfolding procession of circus acts ranging from Joice Heth (Jennifer Perkins), the 165 year old slave who was nursemaid to George Washington, to Jenny Lind (Holly Smolik), and on-going clown bits by the members of the Pi Physical Comedy Troupe. As actor Timothy Johnson noted after the show, “Barnum is a unceasing roller-coaster of highs and lows.” Indeed, the very busyness of the set could be a three ring circus itself – including Jumbo the elephant, swings, clowns and the ten-piece band under the baton of Cole Grissom.

Staged in the open air Magic Castle where families enjoy space on the lawn while sharing hotdogs, hamburgers and other light fare while watching the show, Barnum will be running through August 14th. This is the perfect treat for the young people in your life as summer begins to draw to a close.