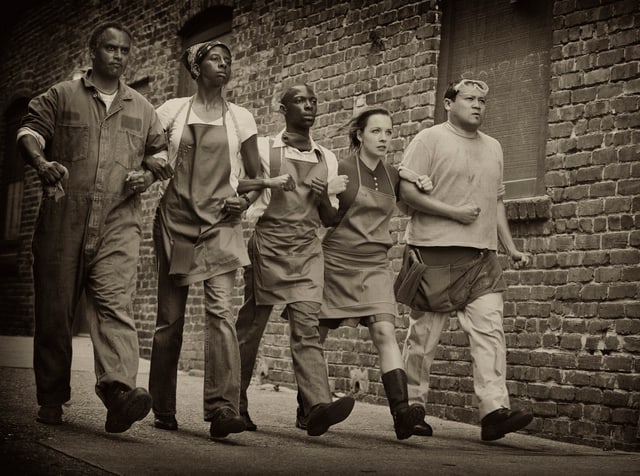 Ever young and vital, it seems inconceivable that the San Francisco Mime Troupe could possibly be fifty one years old. In their dotage, they’ve acquired a dint of respectability, joining the ACT and the Berkeley Rep in being the three Tony award-winning theater companies in the area. Don’t think for a moment however, that the respectability equates to selling out. While remaining true to their founding traditions, they continue to be relevant precisely because they don’t feel like ‘60’s retreads.

It’s impossible to talk about the SF Mime Troupe without talking about the political. In a lengthy conversation with Michael Gene Sullivan, writer, director and actor, I asked Sullivan how the Troupe has remained one of the great SF institutions when so many of the others of their era have either failed or become cartoon versions of their former selves. Sullivan spoke to the importance of staying current and not getting mired in creating art about yesterday’s battles. It’s this emphasis on remaining current that continues to draw audiences. While their political values remain fundamental, their willingness to stay current infused their current production of Posibilidad with a newness and vitality that I didn’t expect. 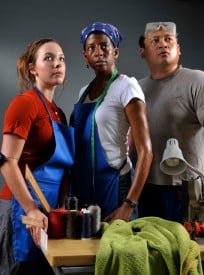 Sullivan’s politics may lie at the heart of his writing, but don’t think for a moment that the Troupe’s work is not entertaining. All too often, leftist politics is humorless – and that’s precisely what the Troupe is not. Unfortunately, that humor isn’t what comes across in their press releases. Had I not had the good fortune to see this show, I probably wouldn’t have based upon their press release. More’s the pity because Possibilidad was incredibly funny – and just as willing to skewer the left with digs about “Collective meeting! Collective meeting!” and new age hokum as it is to question assumptions about the economic basis of modern life.

Not entirely comfortable with the most self-described political art, I asked Sullivan how the Troupe manages to avoid the two dimensionality that afflicts almost every political novelist from Dickens to Upton Sinclair. Sullvan’s answer was equally telling. “You can’t demonize,” Sullivan noted. “You can’t lecture your audience. You have to stay absolutely current. You take challenging the audience very, very seriously. Essentially the show is about the audience. The minute the show is for the audience, it becomes entertainment.”

The plot of Possibilidad involves two struggles – one in the U.S. and the other in Venezuela for worker-owned collectives. However, the heart of this is in the characters – and there were no weak links in this cast. Ernesto Jenkins (Rotimi Abbabiaka) as the self-absorbed new-agey factory boss of the Peaceweaver hemp ware was incredibly funny – but performances by the rest of the cast were equally strong. The range of Brian M. Rivera and Velina Brown were particularly impressive. I confess, the cast had me with the opening tango number. It takes an intensely talented cast to keep an audience attention in an open air venue – and the SF Mime Troupe more than adequately delivered.

Possibilidad continues to tour around the Bay Area throughout August and September. August dates are shown below – and September dates can be found on their web site. Like all SF Mime Troupe performances, seating is free.