Hogs have been enjoying a noticeable surge in “pig popularity” in our food culture.

This rise in adoration for “The Other White Meat” can be traced back to the “bacon mania” movement that started to sweep through US, Canada and UK in the 80s and 90s with the advent of the high-protein Atkins diet. It has morphed from a simple affection for classic bacon to a voracious appetite for cuisine curiosities such as “Bacon Explosion”, bacon donuts, and even bacon chocolate.

There is even bacon-flavored lip balm for those that want the bacon feeling between meals. And to keep things social, there is even BaconCamp San Francisco where people passionate about bacon share the obsession with others. It’s a massive potluck whose net proceeds are donated to the local food bank.

Somewhere in this rise in pork popularity, the “white” in pork seems to be dropped for the seductive fatty cuts that are magnets for flavor.

What do you get when this bacon mania meets the “nose to tail” trend?

Elevation of the whole hog to culinary rapture as was demonstrated in this year’s SF Chefs wine and dine opening night event. It was pork in all its glory as about 30 of the finest chefs in the San Francisco Bay Area gathered together to see what could be created when there are unbridled amounts of pork provided by the National Pork Board.

During the Hog in the Fog event, I came to a couple of conclusions:

Missed the ode to pork event?

No worries, there are plenty of pork on the menus of San Francisco Bay Area restaurants. Here are some of the ones that sound just down right delicious from the restaurant featured at SF Chefs 2010 Hog in the Fog.

Guide to Hog in the Fog

(participating chefs, restaurants and the hog dishes that look enticing) 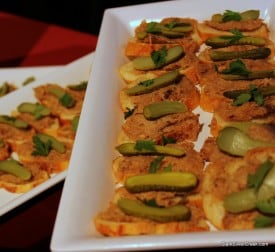 A16, Liza Shaw
Mixed roast of Berkshire pork ribs and sliced shoulder with lemon and peppercress ($23)

Roam, Lynn Gorfinkle
Plenty of beef turkey and bison, but no pork on menu. 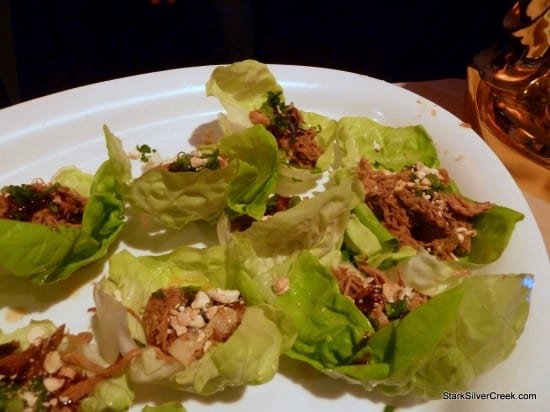