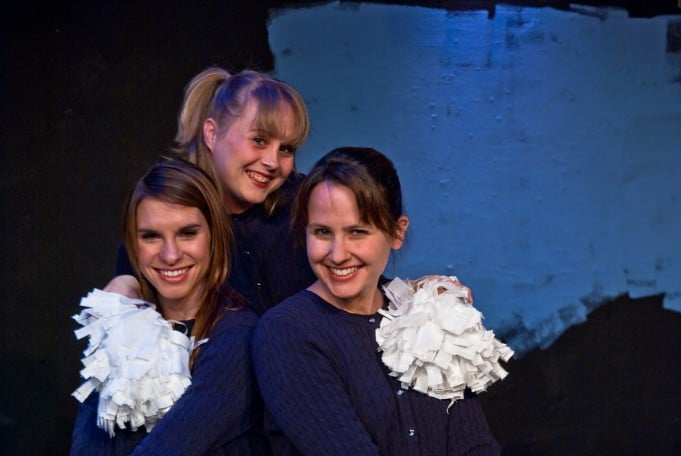 The pressure is unrelenting on a three-member cast working in a tiny space, and director Susannah Greenwood did a masterful job. Between actresses Rebecca Wallace, Casey Semple and Betsy Hourvouras, there were no weak links. This was critical because in a production this demanding, any weakness would have rendered the play as dysfunctional as a two-legged stool. Set designer and artistic director Richard T Orlando didn’t overreach, and his bare bones design worked well. One was left with three actresses, three decades, three acts, and three mysterious doors on the stage.

Given these strengths, my complaints with Vanities are personal. I cringe at Texas accents and I’ve had it up to my ears with predictable, self-congratulatory story lines beginning in the 1950’s and ending in the 1970’s. This story arc has been done as a musical (Beehive), a novel (Loose Change) and a half dozen other ventures. It makes me wonder if there was ever a time when so much art was devoted to decade-by-decade reflection. In the 1940’s, were there Broadway plays about the transition from the 1920’s to the 1940’s? Is there a play about an older Zelda Fitzgerald clone or would that be too much of a tragedy? Were people ever as obsessed as we seem to be about placing their own aging in a cultural context? Why is it always about us? Is is really about our own vanity?

I wrack by brain for other decade-by-decade examples – and they’re all too sufficiently remote in time to reek of self-serving pablum. Ragtime immediately comes to mind, as does Upstairs Downstairs which traced the personal changes of the Bellamy family through the Edwardian era to the end of World War I. This iconic serial documented how the family and the decades both changed and were changed by each other, but this was a historical fiction, not navel-gazing. In the 1960’s, there were countless World War II stories – but the subtext was not how irrelevant we were then and how smart we are now. 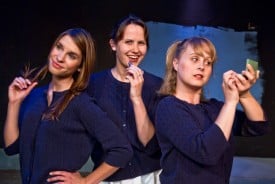 All of this is ranging far afield. Vanities does better than most in approaching this type of story line. While Vanities offered no surprises, its characters didn’t have the cardboard cut-out quality as those in Beehive. One of the characters, Betsy Hourvousas, deftly steers around self-congratulatory drivel and retains a self-respecting sense of mystery at the end.

The surprise for me was the Northside Theatre Company. I was unfamiliar with Northside – and struck by just how good this company really was. The cast really did an excellent job with difficult material and I’d love to see this company produce a script I liked. The five plays of their 2010-2011 season look fascinating and I look forward to returning.