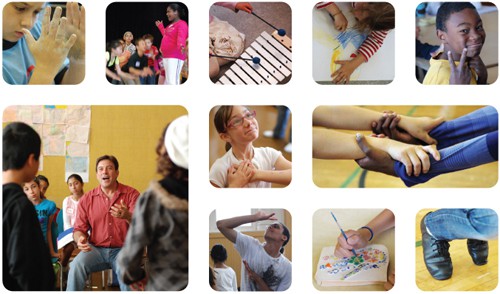 3 out of 5 stars - 'Worth a Look'
SFArtsEd Players, San Francisco Conservatory of Music
Review by Cy Ashley Webb

Some time back, I referred to my reluctance to review children’s theatre in the absence of some other compelling story or community event. Last night’s performance of Carousel by the SFArtsEd Players was sufficiently compelling to overcome this block. In existence since 2002, the Players perform two shows a year. This year’s summer performance was in the stunning San Francisco Conservatory of Music. It was only in 2006 that this became a concert venue. Originally built as a ballroom in 1914, the ornamentation of the building, included the plaster ballroom ceiling, was meticulously preserved.

Event chairwoman Lynne Winslow explained that this performance is just a very small part of what SFArtsEd does for the kids of San Francisco. The heart of their program was an artists-in-residence program that has served over 200,000 kids since its inception in 1965. With a cast composed of SFArtsEd Players alums and a chorus of current Players and summer students, the lucky kids selected to be in this performance were among the best of San Francisco’s student talent. It was clear that something very special was happening here.

Staged as a concert version of Carousel, the performance space was empty except for the performers of the UC Berkeley Summer Symphony and the actors. Given how hard it is for unamplified voices to soar above even small bands without mics, I was amazed at the chops on these kids. Rodney Jackson as Billy Bigelow has a voice and moves that just didn’t quit as he dominated the space from beginning to end.

Given that the stage was bare, choreography was all-important in this production. Ensemble dance numbers were well integrated with lots of small children with clean moves that looked like they had been in rehearsal for substantially longer that the three weeks that Ms. Winslow told me that this had been in production. The high-energy Blow High, Blow Low and June is Busting Out All Over numbers highlighted the strengths of the younger kids, which was good to see. The brief ballet by Hye-Jin Yun as Louise was incredibly graceful, which contrasted well with her scrappy character.

I left the theatre looking forward to the SFArtsEd Players next performance in February of Cole Porter’s Anything Goes.

Carousel
SFArtsED, San Francisco Conservatory of Music
3 out of 5 stars