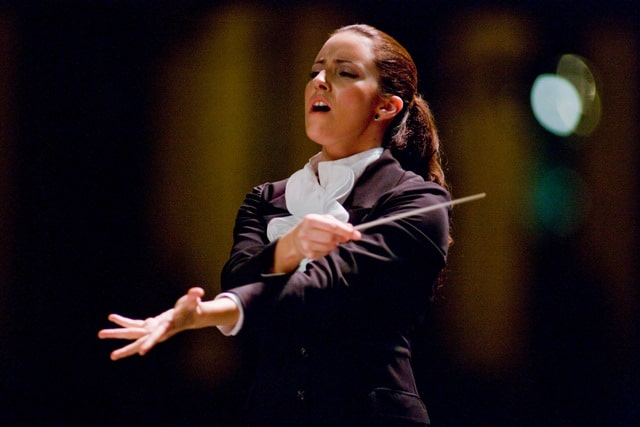 The older I get, the more I appreciate things that are reliably excellent. I’m sure you know what I mean: the perfect turtle neck you buy in multiple colors, the Craftsman socket set, the multigenerational cast iron fry pan… the list goes on. Not only does the San Francisco Symphony make that list, but they do it while delivering one surprise after another.

The Symphony’s 2009-2010 grand finale was no exception. With Alondra de la Parra at the baton, the evening began with John Adams’ Short Ride in a Fast Machine. Aptly named, the steady beat became progressively agitated until it culminated in a cacophony. This provided a perfect contrast to the opening notes of the piece that followed. Copland’s Estribillo gently wandered here and there, with rivulets of music following first one idea, and then another, which allowed the listener to recover his wits after the Short Ride. The two subsequent Latin-American Sketches – Paisaje Mexicano and Danza de Jalisco were very different, as all eyes and ears were on the percussionist who cycled through wooden clappers through triangle through cymbal.

The surprises of the evening began with Charles Ives’ The Unanswered Question as a second conductor led the flutes and the leading horn was sounded off stage by a musician in the audience. Bows moved with glacial slowness through this piece, as the question was sounded from seven times, followed in response by burbling flutes. Unperturbed, the strings continued, almost as a drone, throughout the entire piece.

Copland’s Lincoln Portrait followed, narrated by Chris Noth. Being reasonably disconnected, I was unaware that Chris Noth was Mr. Big until he walked on stage – so his very presence would have been treat enough. However, his narration was the best I’ve ever heard. Lincoln Portrait is a stunning musical work that demands your full attention. Adding a narration to this – even one that opens with Lincoln’s resonant words– “we cannot escape history” is incredibly hard to pull off. It doesn’t matter how well the narrator is mic-ed or how well the music and narration are balanced, the two threads of this piece are so rich and so distracting that is hard to do justice to both. Noth managed to pull this off with such a sense of presence that I found my eyes welling up at the last words of the Gettysburg Address.

The second half of the concert moved forward as the growing excitement of the audience became progressively palpable. Keeping with the American focus of the evening, the program rapidly moved from Ive-Schuman’s Variations on “America” to a jazz band version of Rhapsody in Blue. Rhapsody in Blue is such a standard that it seems inconceivable that it could possibly prompt an audience to rise to their feet afterwards, applauding wildly, but Sara Davis Buechner’s virtuoso performance left everyone stunned. Even my nineteen year old continued to marvel aloud at her performance the following morning.

Continuing the Gershwin thread, the Symphony followed with Strike up the Band, which provided a fitting lead-in to the entry – from the back of the room – of the entire UC Marching Band playing Seventy Six Trombones with an enthusiastically clapping audience. The drop of red and blue balloons along with huge mylar stars was better than at any political convention I’ve ever been to – not the least because of the totally unpredictability. The audience kept as many balloons aloft as possible, while the marching band attempted to march through the thigh-deep balloons in the aisles.

It’s hard to imagine how the evening could have possibly been any better. Heading home, I spied were a very sweet-looking, impeccably dressed elderly couple, clutching four balloons between them. I’m sure they agree.