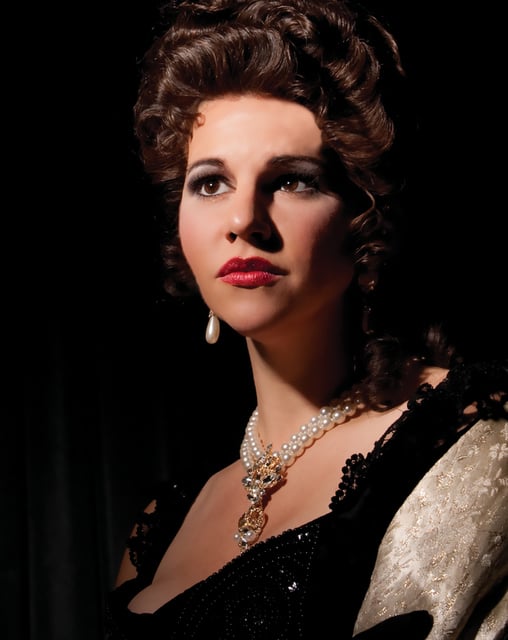 Opera San José launches its 27th Anniversary Season with the West Coast premiere of Anna Karenina, an American opera by composer David Carlson with libretto by the late Colin Graham. Eight performances are scheduled from September 11 through 26 at the California Theatre, 345 South First Street in downtown San José.

Anna Karenina—beautiful, wealthy, aristocratic—is nonetheless vulnerable, unhappy, and caught in a rigid society that crushes anyone who does not follow the rules of the game. Her deeply personal, tragic story has long been familiar through the practically perfect novel by Leo Tolstoy and the two most memorable film versions starring Greta Garbo and Vivien Leigh. Told with compassion and unsentimental observation, the story follows an upper-class woman in 19th-century Russia through a loveless marriage, burning love affair, wrenching heartbreak, and finally her sudden death. Yet more than a terminal end to an unfortunate existence, Anna Karenina concludes with the transcendent beginning of new life underscoring both the tragedy and the happiness of Tolstoy’s masterpiece. It is opera at its most affecting, combining Tolstoy’s very human drama with powerfully expressive American music that draws on Tchaikovsky for its orchestral models while utilizing arching melodic utterances unique to composer Carlson’s personal style.

In collaboration with noted British librettist and stage director Colin Graham, Florida Grand Opera commissioned David Carlson to compose Anna Karenina in celebration of the 2007 opening of the Ziff Opera House in Miami, with a co-production by Opera Theatre of Saint Louis. The premiere production attracted sold-out audiences and received wide critical acclaim. The New York Times applauded Carlson’s “well-crafted lyrical score” and “romantic and luxuriantly textured music.” Opera News praised the “powerful, entertaining, and moving” orchestrations and The Toronto Star lauded the production as one of Graham’s “major successes.”

Anna Karenina at Opera San José is the third production of the opera, presented with a new scene written by Carlson and Mark Streshinsky, director of the world premiere in Florida. “Both director Mark Streshinsky and I felt that [the character] Vronsky needed further fleshing out, to have it make sense that Anna would fall for him, and we both saw that a new scene could fix that to some degree.” Carlson remarked. “It’s only four minutes long, but it seems to fill the missing link. I had a lot of fun with this new scene, evoking for a few moments the style of Tchaikovsky.”

David Carlson, a native of California, has composed successfully in many genres including orchestral music, chamber music, and opera. His works have been performed by the Philadelphia Orchestra, National Symphony Orchestra, San Francisco Symphony, and the Tanglewood Festival, among others. In addition to symphonic works, Carlson has written three operas, The Midnight Angel (1993), Dreamkeepers (1996), and Anna Karenina (2007). Carlson has received an Academy Award from the American Academy of Arts and Letters, as well as awards from Meet the Composer and Chamber Music America. His most recent work, The Promise of Time, was written through the Bay Area’s Magnum Opus commissioning program, with performances by the Marin Symphony Orchestra, Oakland East Bay Symphony, and Santa Rosa Symphony.

Award-winning stage director Brad Dalton returns to Opera San José to direct Anna Karenina. “I am thrilled to be staging this lush, highly emotive score in a new production that moves nimbly and evocatively through its many locations,” says Dalton. “Rarely does an opera take us so many places.” Dalton’s previous credits with the company include Così fan tutte and Madama Butterfly for which he received critical acclaim. He has directed productions for opera companies throughout the United States and abroad, including San Francisco Opera, The Metropolitan Opera, Washington Opera, and the State Opera of South Australia.

Alternating in the role of the beautiful and passionate Anna are sopranos Jouvanca Jean-Baptiste and Jasmina Halimic, two new members of Opera San José’s resident company. Jean-Baptiste made her mainstage debut with Florida Grand Opera in the role of The Abbess in Suor Angelica and has been a semi-finalist in The Jensen Foundation Vocal Competition. Halimic received accolades for her Opera San José debut as Magda in the company premiere of Puccini’s La rondine during the 2009 – 2010 season. Other recent performances include the Countess (Le nozze di Figaro) for the Intermezzo Foundation in Belgium and Mimì (La bohème) with Amore Opera in New York City.

Three former artists from Opera San José’s resident company return as guest artists for Anna Karenina. Soprano, Khori Dastoor (resident company member 2007-2010) performs the role of the beautiful, yet vulnerable Kitty Scherbatsky. Dastoor thrilled Opera San José audiences during the 2009-2010 season with her performance as Susanna in The Marriage of Figaro and the title role in Manon. Recent performances featured Dastoor as Blondchen (The Abduction from the Seraglio) in her debut with the Midsummer Mozart Festival. Appearing in the role of Anna’s elder brother Stiva Oblonsky will be tenor Christopher Bengochea (resident company member 2005-2008). During Opera San José’s 2009-2010 season Bengochea received praise for his performance of Ruggero in Puccini’s La rondine. His previous roles include Rodolfo in La bohéme, the title role in Roméo et Juliette, and Pinkerton in Madame Butterfly. In addition to Opera San José, Bengochea has appeared with Opera Idaho, Atlanta Opera, and Opera Saskatoon, to name a few, and was a featured soloist with the San Juan Symphony and Modesto Symphony. Bass, Kirk Eichelberger (resident company member 2001-2003, 2005-2006) takes on the role of Alexei Karenin, Anna’s husband and a highly placed politician. Eichelberger has performed numerous roles with Opera San José including Frere Laurent in Romeo and Juliette, Leporello in Don Giovanni, Guglielmo in Così fan tutte and Colline in La bohème. He was recently seen as The Emperor in Tan Dun’s Tea: A Mirror of Soul with the Opera Company of Philadelphia and sang the roles of Timur in Turandot and Mephistopheles in Faust with The Festival Opera of Walnut Creek.