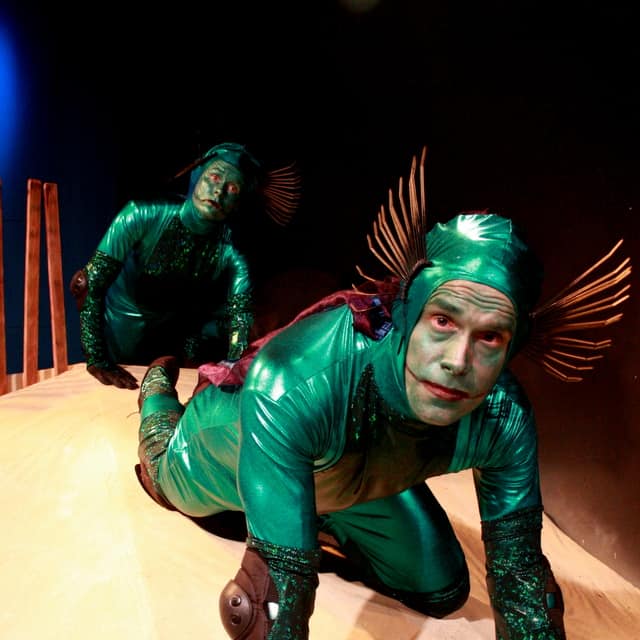 If you like Edward Albee, you’ll adore the Dragon’s production of Seascape. If you’re not into Albee, perhaps you’ll be entranced by the lizards in the second act.

Written in 1975, this Pulitzer-prize winning play enjoyed a 2005 revival. This was curious because the actors play off each other with exquisitely gender-linked posturing that hasn’t traveled well in the intervening 35 years. Albee’s obsession with relationship seems over-intellectualized when his characters themselves are so two-dimensional. This is no fault of this particular production, but rather of Albee’s work in general.

Set in two acts, the script presents a curious set of reversals. Act One opens to with an aging couple at the shore, debating the options for retirement. Nancy, overwrought and petulant, is hardly likeable as she tries the nerves of her eminently personable husband Charlie who plays an oddly parental role to her stereotypically female drama. In Act Two, the roles are reversed with Nancy becoming the more likeable of the two as Charlie descends into antagonistic bravado.If the relational focus of the play tedious, the performance by Bill C. Jones was mesmerizing throughout. Even when he was at his most objectionable as a character, one was entranced watching him. Simple moves such as stretching out on the sand dune were crafted to perfection. However, Jones’ stellar performance notwithstanding, the first acted dragged and was as tedious as the relationship between the couple themselves.

Energy levels picked up considerably in Act II, thanks to the appearance of the two lizards, Leslie and Sarah. With perfectly articulated movements and costuming that sharply contrasted with the set, Alex Hero and Jean Naughton were as fascinating to watch as Bill C. Jones, albeit in a very different way. While Albee no doubt intended the second act to speak to abstract notions about the evolution of relationship, the lizard performance was so entrancing that it took center stage. These moves were so contagious as I found myself taking them on as I moved around Safeway after the show.

Albee fans will no doubt appreciate this Dragon production. However, if you’re not particularly into Albee, you may wish to take a pass.